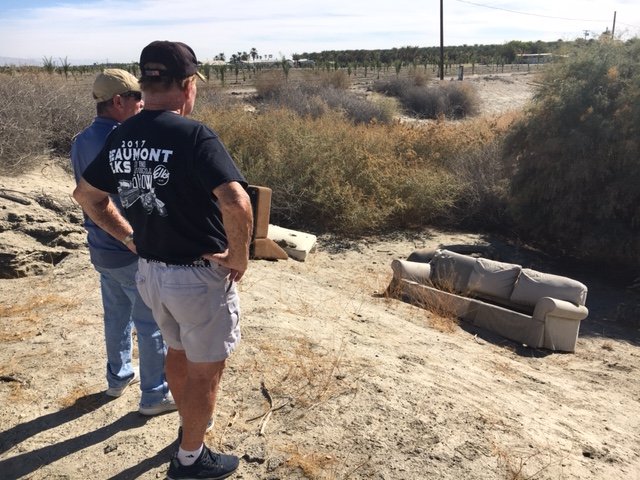 "Supervisor Perez’s office has recently met with the residents and we are doing research on their requests to address the issues.  Unfortunately, illegal dumping is an issue in many communities.  Illegal dumping is senseless, especially when we have many resources such as bulky item pick-ups and household hazardous waste collections for people to dispose of waste items for free, instead of polluting our environment.  When dumping occurs on private property, our county Code Enforcement Department works with owners to clean up their properties.  Over the past few months, Supervisor Perez has brought county departments together on a combustible materials task force to clean up sites with accumulated green waste that pose a fire risk, and we will soon announce results of that work.  In any event, please know that Supervisor Perez and his staff are being responsive to these concerns and open to finding solutions."

Trash and debris is dropped off on roadways and in open fields in and around Vista Santa Rosa near Thermal.

"We pay our taxes and there is no waiting in line whenever they want their money for taxes. Yet when we need help in getting our money's worth out of those taxes where are they?" asked homeowner Kelly Grimes.

They say they and other neighbors have been complaining to the county "for years" about dumping happening in an open field off Avenue 55, next to their development and on other fields and roads nearby.

"The frustration has gotten to a point where my neighbors got the house up for sale and they're leaving," said homeowner Bob Farris.

Driving through one field, we found sofas, mattresses, other furniture and household items and lots of tires.

There were also tires left along Avenue 54.

"I've tried to make a list of suggestions so that we are not just complaining. Nobody has asked me about my suggestions. Stuff that wouldn't cost the county a dime," said Grimes.

Grimes says they recently received a response from code enforcement after making countless phone calls and sending emails, some to the office of their county supervisor, V. Manuel Perez.

Grimes and Farris say "finally" this past Friday, two code enforcement officers came out and met with them.

During that meeting they were invited to attend another meeting.

The men say they are tired of talking and want action.

On behalf of the homeowners, and in effort to help them find solutions, News Channel 3 requested an interview with Supervisor Perez.

We also relayed the resident's complaints to the county's public information officer.

"At least make an attempt, at least try to do something about what's going on. Right now they're just burying their head in the sand and not doing anything," said Grimes.