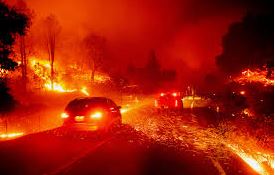 The work of a firefighter can mean long, labor-intensive hours.

Multiple Cathedral City firefighters were sent to battle the Kincade Fire that broke out in Northern California's Sonoma County on October 23rd. A 5-engine strike team headed up from Riverside County.

“I think it was a total of 9 days," said Cathedral City Firefighter Thomas Lawrie.

Lawrie recalls being up there for about that time. He and Cathedral City Firefighter Christopher Dietz were among those called up to help with the fight.

Once they got there, there wasn't much time to recuperate from the long drive.

“We were told we were going to bed down for the night. I think we bedded down for 40 minutes," Lawrie said.

Both began surveying an area of homes that could potentially be in the fire's path.

"I think it was 11 or 12 at night. So everything we were doing was in the dark. We’d never seen this area," Lawrie said.

"It’s a struggle but honestly that’s what we train for," Dietz said.

Dietz says despite having to work hours on end, what drives them is wanting to help the residents in need.

"They’re in a time of need for us so that kind of keeps us spurred on and keep us engaged in what our tasks need to be," Dietz said.

The Kincade Fire went on to burn over 77,000 acres. A total of 374 structures were destroyed.

Cathedral City Battalion Chief Eric Hauser says despite being in the service for over 30 years, there's always something to take away from battling these large fires.

"You really need to make sound decisions on where you’re going to deploy your resources and personnel," Hauser said.