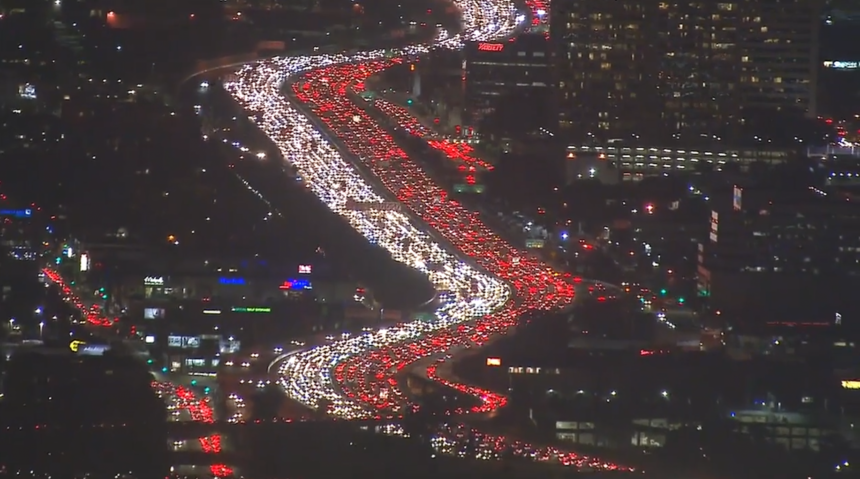 A winter storm moving into the valley and across the Southland the same week as one of the busiest weeks of holiday travel is wreaking havoc on the roads and making for a ferocious week of travel.

Some drivers are making the call to just stay home altogether.

"We're going to go home; we're going to buy some groceries and just stay there...safest place to be," said Robert Cohun, who lives in the local mountains where up to 3 feet of snow could be dumped in the next few days.

On the valley floor, the potential for flash flooding over Thanksgiving isn't exactly the sunny vacation some visitors expected.

"I thought I was gonna be laying by the pool actually," said Phoebe Brooks, who's visiting from Sacramento. "A little disappointed."

Brooks was able to beat the holiday rush on the roads, but her brother isn't so lucky.

"I'm super relieved; my brother's flying into LAX tomorrow and he's traveling into Palm Springs, so we'll see how that goes," she said. "I'm glad I didn't say I was going to come pick him up from the airport. That's going to be bad."

Flights around the country are being affected by this weather system.

"They say its the worst when you're flying but when you're driving, now it's raining and who knows whats going to happen," Nate Buado said. He and his family were passing through the valley on the way to Arizona, making sure to hit the road early ahead of the holiday, and the inclement weather.

"We're leaving the storm and beating the traffic, but we were actually stuck in traffic for about 3 hours in Los Angeles," Buado said.

In preparation for flooding, the city of Coachella is offering free sand and sandbags at the corporate yard at 53462 Enterprise Way. You can also pick up free sandbags at any Riverside County fire station across the valley.

When it comes to two turkey trots being hosted in Palm Springs and Palm Desert on Thanksgiving morning, organizers say they'll go on despite the weather.

"Race takes place rain or shine," said Molly Thrope, race director with Palm Springs Marathon Runners. "We have this handy turkey hat that everybody gets with registration so I guess that'll help shield people from the rain."