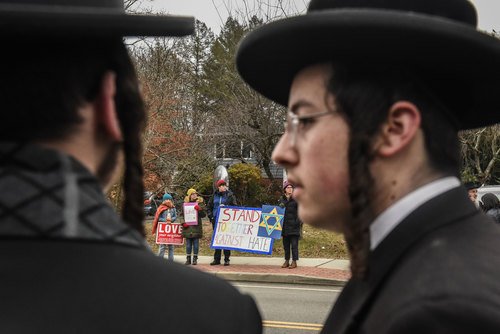 A local rabbi responds to an anti-semitic attack in the suburbs of New York, where a 38-year-old man accused of stabbing five people celebrating Hanukkah.

“It sickens me that in almost 2020 that we have anti-Semitism run amuck in this country and its turning into a cancer," said Rabbi Steven Rosenberg.

Less than a day after another violent ambush, Rabbi Steven Rosenberg can't believe the attacks continue.

“I never thought in my lifetime I would see that maybe that was something you see in Europe but here in the United States, its unacceptable," said Rabbi Steven Rosenberg.

Rosenberg taking action to alert his congregation about the safety measures after the ambush that happened on Saturday night.

“We have upped our security. We have had a security advisor come in and give us recommendations and we have taken some of them. There are security measures that people will see but there measures that they won’t see," said Rosenberg.

After dozens gathered at a Rabbi's home in Monsey, New York to celebrate Hanukkah when a man stormed in with a weapon and face covered.

Five people were stabbed. The motive described by authorities as an anti-semitic after investigators found journals and materials in his phone that alleged it was a hate crime.

“It makes me feel really sad that my fellow Jewish brothers and sisters have to live in fear. People just wanted to go synagogue or just wanted to go celebrate Hanukkah and now they are in the hospital," said Rosenberg.

According to the anti-defamation league, there have been two reported anti-semitic vandalism incidents in Palm Springs, where swastikas were vandalized on Jewish buildings.

Even law enforcement also took action, LAPD police tweeted on Sunday that there will be an increase in and around Jewish communities and around places of worship.

LAPD and Palm Springs police increased their patrols around synagogues.

“We are going to be working with our temples providing some extra coverage over there," said Mike Kovaleff, Captain of Palm Springs Police.

Officials asking the community to be mindful.

“We encourage the public if they see something unusual, somebody unusual to notify us immediately and that goes for any religious institution," said Kovaleff.

One last message of hope for the Jewish community.