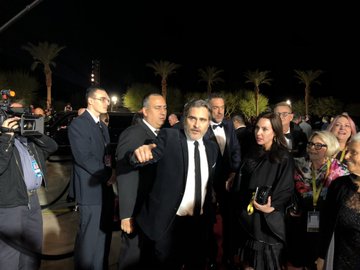 The job's not for the sluggish or weak of heart.

"You have to be in shape for that. It's kind of like a sporting event. The more you do it, the more practice you've got in consuming that much film and trying to keep your eyes fresh," David Ansen, the lead programmer of the 2020 Palm Springs International Film Festival.

To be a film festival programmer is to watch hundreds of movies -- with a discerning eye each time.

"It's sometimes difficult because yes some of them are painful to watch and I mean painful because I mean they're not very good," Therese Hayes, the programmer overseeing the Asia region.

But the ones that are have moved the programmers and made it, in a sense, through the audition process to you.

"I don't bring films here if I don't feel that strong connection," said Hebe Tabachnik, the programmer overseeing Latin America region. "I really kind of say, well, if that film connected so deeply with me, I think it probably would connect with this amazing audience we have in Palm Springs."

"What's really exciting to me is the number of first-time filmmakers that are here with really, really audacious and accomplished films," Jane Schoettle, the programmer overseeing the Canada and Oceania regions, said. "I think that's quite remarkable."

But with 188 movies programmed in the festival lineup, the sheer number of options can push a festival-goer into choice paralysis. Each programmer curates films from an assigned region of the world, and while it was tough for them to recommend just one film, the group did select a few to help festival-goers navigate the cinematic terrain.

For Asia, Bong Joon-Ho's "Parasite" is a must-see. The movie, featuring members of a poor Korean family manipulating their way into the lives of their rich employers, already has big Oscar buzz for Best International Film.

For Canada and the Pacific Rim region, Schoettle picks Hamish Bennett's drama "Bellbird," which follows a New Zealand dairy farmer struggling and healing from his wife's death and the relationships he builds with his son and the local community.

For Latin America, Tabachnik picks "Lina from Lima," a second feature from María Paz González about a Peruvian immigrant who copes with life by diving into wondrous musical daydreams.

For the Middle East and African region, programmer Celine Roustan picks "Arab Blues," a comedy following a woman who moves her psychotherapy practice from Paris to Tunisia.

"My mother is Tunisian, and I've lived in the Middle East so I have a very good idea of what those countries are like and not what people see on tv or the news, so I wanted to bring stories that reflected that more," said Celine Roustan, the programmer overseeing the Middle East and Africa region.

The 2020 Palm Springs International Film Festival lineup is the triumphant offering sculpted from thousands of submissions and choices, with a range of films boasting heart and suffering and delightful moments of the human experience.