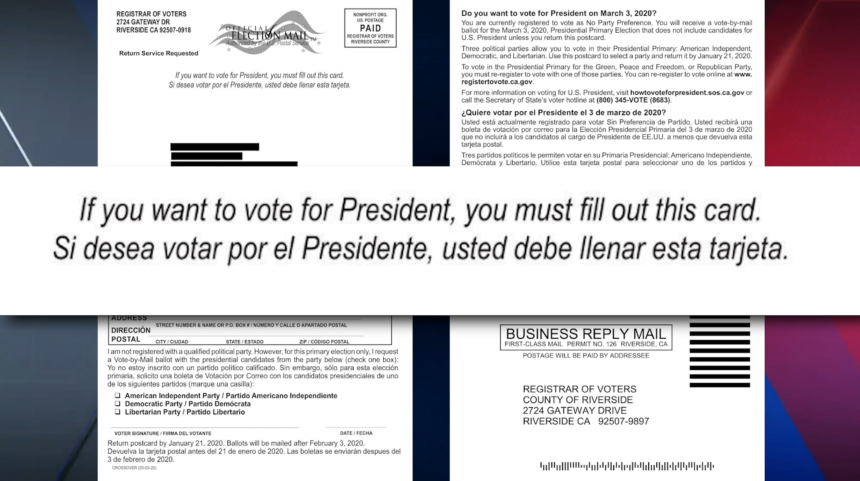 With less than 55 days until the March 3 primary, an important notice some voters received in the mail this week about the presidential primary election is causing confusion.

It was sent to all voters registered under the 'No Party Preference,' and warns, "If you want to vote for President, you must fill out this card."

"A lot of people thought they were already registered so therefore they do not have to do anything," said Becki Robinson, a voter registration coordinator. "They're going to find out that they're not going be able to vote in the election."

Due to nationwide party restrictions, voters who haven't declared a party can't vote in the March primary by mail.

Robinson said those voters will receive a blank ballot with no candidates listed.

There are more than 267,000 No Party Preference voters in Riverside County, nearly a quarter of all registered voters.

On the postcard, No Party voters can request vote-by-mail ballots for the American Independent Party, the Democratic Party, or the Libertarian Party. It must be returned by January 21.

They cannot request a ballot from the Republican Party, the Peace and Freedom Party, or the Green Party because those parties do not allow cross-party voting in the primary.

If you go to a polling place on the day of the primary, independents with No Party Preference declared won't be able to vote for those parties either. Instead they must go RegisterToVote.ca.gov to re-register and change their preference to the party they plan to vote for by Feb. 18.

It's an important point that has major implications for the presidential nominee.

"If they can't vote in the primary, then their voice is not heard and their candidate may not be the candidate that is chosen," Robinson said.

This will not affect the Presidential election in November — any voter registered to any party can vote for any candidate.