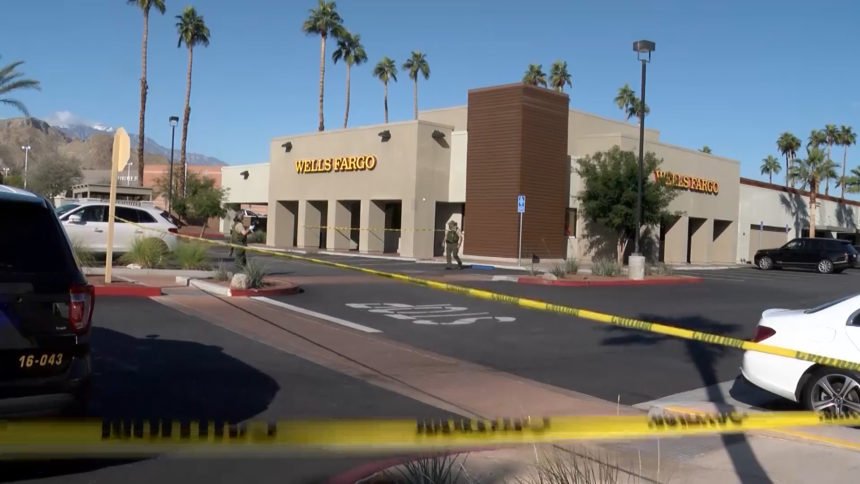 Relatives of employees at a local Wells Fargo voiced their frustrations after the bank was robbed Thursday morning. The robbery marked the second hold-up at that location in just over six months time.

According to Deputy Robyn Flores, Riverside County Sheriffs public information officer, at approximately 9:16 a.m., a man entered the Wells Fargo bank on the 43400 block of Bob Hope Drive brandishing a handgun. Police weren't saying how much money the suspect left the bank with.

There were no arrests and authorities had not released a suspect description.

The bank was closed for several hours, and employees stayed inside with investigators.

Relatives waited for them outside in the parking lot including Oscar Granillo who waited for his wife.

The same bank was robbed on June 10, 2019. The suspect from that incident was only described as "an adult male covering his face" and remains wanted, according to the Sheriffs Department. It's unclear if the robberies are connected.

"One time's enough. After the first time, they should have done something," Granillo said.

Granillo said he's frustrated because unlike several other banks, this location does not have a protective barrier for employees.

"Personally I think those things should be at every bank. I think any robber or someone who wants to rob a bank is going to think twice about going into a bank if there's a barrier there," Granillo added.

Josue Hernandez waited for his daughter, a teller at the bank, to come out.

"From what I understand, they put a gun on her back," Hernandez said.

Once Hernandez heard the news, he got there as quick as he could. He says his daughter was off the day the first robbery happened. Either way, he believes a protective barrier should have been put up a long time ago.

The protective parent, now insisting he'll take matters into his own hands.

"I know she's not going to be working there anymore. They don't pay her enough. It's my decision," Hernandez said.

We reached out to the bank and the City of Rancho Mirage to see why a barrier has not been put in yet. So, far we have not heard a response.

Stay with News Channel 3 for any updates on the investigation.

If you have any information on either robbery, call 760-836-3215. You can also submit a tip online, click here to visit that page.

If you wish to remain anonymous, call Valley Crimestoppers at 760-341-7867. You may be eligible for a cash reward.