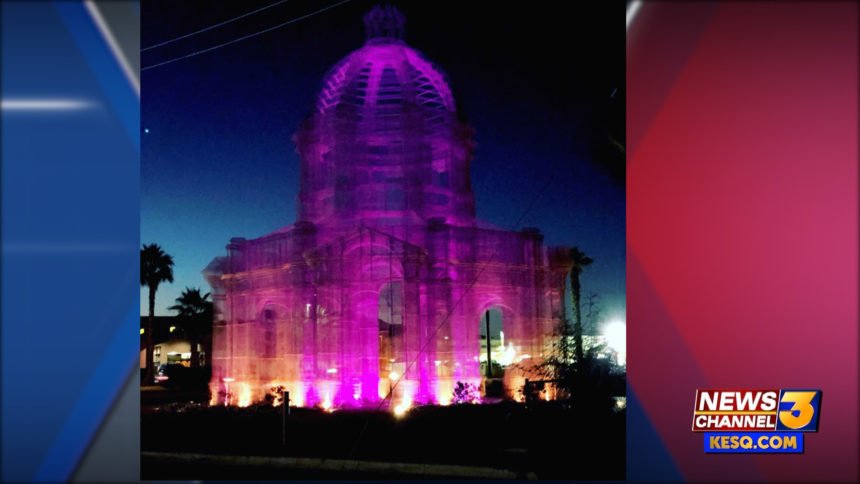 Kobe and his 13-year-old daughter Gianna "Gigi" Maria Onore Bryant were among nine people killed in a helicopter crash while on their way to a basketball game on Sunday morning. Gianna was expected to play in the game and Kobe was expected to coach, according to Lady Mavericks team director Evelyn Morales.

Tributes and memorials have popped up across the country and around the world.

Here in the Coachella Valley, the La Quinta High School and Xavier College Prep girls basketball teams held a moment of silence to honor the victims of the crash.

Coachella paid tribute right in the heart of its city.

The "Etherea," located at the intersection of Cesar Chavez Street and 6th Street, was illuminated in purple and gold Tuesday evening. The colors that defined the career of the "Black Mamba."

The "Etherea" was created by Italian artist Eduardo Tresoldi. Kobe notably grew up in Italy, moving to the town of Rieti when he was 6 years old.

The transparent sculpture was featured as an art piece during the 2018 Coachella Music & Arts Festival. It was then gifted to the city of Coachella and unveiled in February 2019.

Another parent, Christina Mauser, was killed in the crash along with 13-year-old Payton Chester and her mother Sarah Chester. Payton's grandmother, Cathy Chester, said they were on their way to the same basketball game.

The pilot of the helicopter was identified by the coroner'ss office as Ara Zobayan.

The FBI and National Transportation Safety Board are investigating the crash. An NTSB board member stated it could take 18 months to determine what caused the crash.