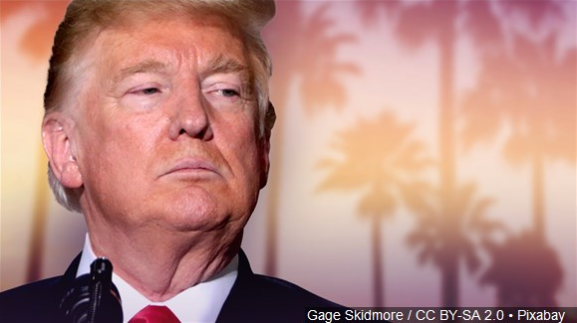 With President Trump coming to the valley next week for a fundraiser in Rancho Mirage — valley Republicans are gearing up for the excitement surrounding a presidential visit as valley Democrats say they're preparing one of their largest protests yet.

"Oh my gosh, there's big bucks here," said Joy Miedecke, president of the East Valley Republican Womens Federated. "If you’re fundraising why not go where the money is."

The Trump campaign invited supporters next Wednesday to the Ellison Estate in Rancho Mirage, where former president Barack Obama played golf as recently as 2017.

Miedecke said she is looking forward to Trump being in town, even though she likely won't get to meet him.

"I would love for him to know that we have hard people in this valley working for him," she said. "I'd rather see the money in his pocket than him shaking my hand."

The exclusive event will costs attendees between $100,000 to $250,000 for perks that include a roundtable discussion, photo ops, and a golf outing for two.

"If he can get that kind of money and sell out, more power to him," Miedecke said.

Trump has been connected to the Coachella Valley before, though. The Spotlight 29 Casino was managed and renamed by Trump in 2002 — a relationship that only lasted a couple of years.

Trump also spoke on a radio show in 2016 about the iconic Palm Springs windmill farm.

"Driving into Palm Springs, California, and it looks like a poor man's version of Disneyand," Trump said. "It's just the worst thing you've ever seen, and you know, kills all the birds."

"The hurt that he's actually doing to our communities — he's not welcome here and we will be protesting him when he does arrive," said local activist Yasmin Espinoza.

Valley Democratic groups are gearing up for the president's visit too, with protests already being planned.

"We would like him to know that the actions that he's taking are inconsistent with the values that many of us have here in the Coachella Valley," said local activist Lynnie O'Neill. "I don't think he'll listen, but that doesn't mean people should stop trying. ... The point of it is not the change him; the point of it is to change us and to unite us."

Trump also has events planned next week in Beverly Hills and Bakersfield. After Wednesday's fundraiser, he will head off to a campaign rally in Phoenix that night.