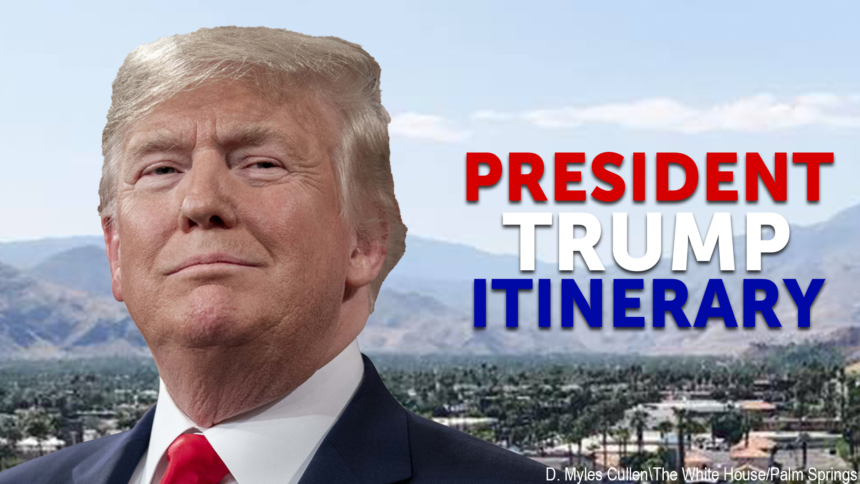 President Donald Trump flew into Palm Springs in the morning and departed in the afternoon, wrapping up his trip to Palm Springs in just over three hours. His focal stop came in the late morning, at a fundraising event in Rancho Mirage.

Air Force One took off from the airport at 1:45 p.m., destined for Bakersfield.

Billionaire and Oracle CEO Larry Ellison will host the golf fundraiser at Porcupine Creek for the president's reelection campaign.

The cost of attendance for Ellison's fundraiser ranges between $100,000 and $250,000. Attendees are paying for a golf outing for two, photo opportunities, and a roundtable discussion.

In the immediate area of the airport, officials and law enforcement are adjusting their regular travel patterns. PSPD put out a notice Wednesday morning on the closure of Kirk Douglas Way, the main path of access to the airport.

Due to the breadth of the President's visit, agencies across the valley have been involved in the logistical groundwork for the day.

“There’s a lot of agencies involved and a lot of planning that goes into an event like this," Palm Springs Police Sergeant Mike Casavan said.

Local law enforcement can't say much, but they do say they are prepared for the big arrival.

“This is a well-planned event, and we’re doing our best to minimize the impact on the public," Sgt. Casavan said.

"We are recently visited with a rally this last November by presidential candidate Senator Bernie Sanders and this past weekend, former President Barack Obama was spotted visiting one of our historic country clubs. The gathering continues, as our community and first responders are busy preparing for President Donald Trump's visit. We are proud that the historic tradition continues and look forward to future visits by political leaders."

Stay with News Channel 3 for our full coverage of the President's visit.