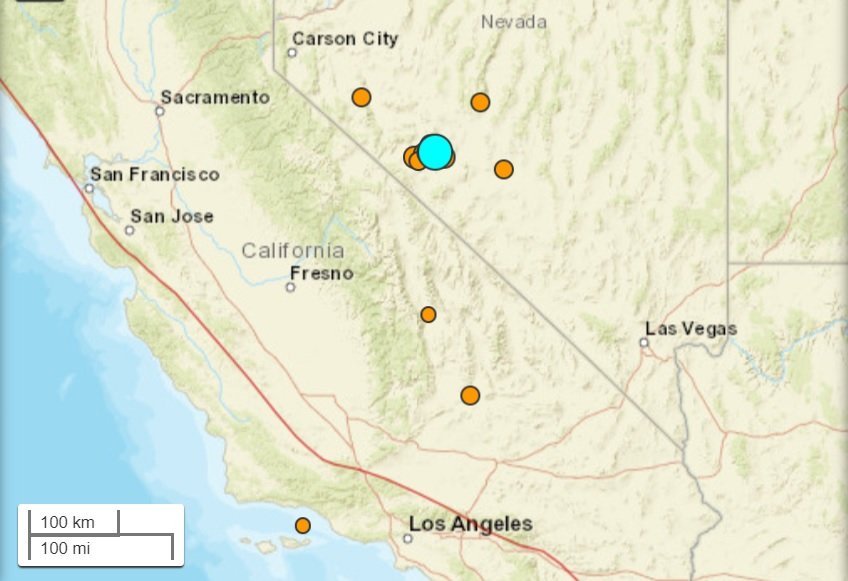 A 6.5 Magnitude earthquake, centered in a remote area of central Nevada near the California border early Friday morning, could be felt across much of the west coast, according to the United States Geological Survey.

It was reported at 4:03 a.m. centered west, northwest of Tonopah. The area is 130 miles south of Reno, 225 miles northwest of Las Vegas, 80 miles east Bridgeport, California and approximately 100 miles north of Bishop, California.

The quake was initially reported as a 6.4 in magnitude, then adjusted down to 6.2M after being reviewed by seismologists, then upgraded again to a Magnitude 6.5 quake. It was followed by numerous aftershocks in the range of 4.0 to 5.1.

The shaking was felt at the KESQ-TV studios in Thousand Palms where ceiling lights were swaying.

It was centered at a depth of 1.7 miles in the shallow crust of the North American tectonic plate.

There have been almost 15,000 'Did you feel it' reports, with people logging into USGS to report it according to the USGS.

Esmeralda County Sheriff's Deputy Jacob Stritenberger felt the main earthquake and it was the biggest one he's ever experienced, he said.

Deputies are checking out reported damage on US 95.

"North- and southbound is undrivable around mile marker 89," Stritenberger said. "According to people who called it in, it's buckled really bad."

Stay with News Channel 3 for the latest developments on this breaking news story.