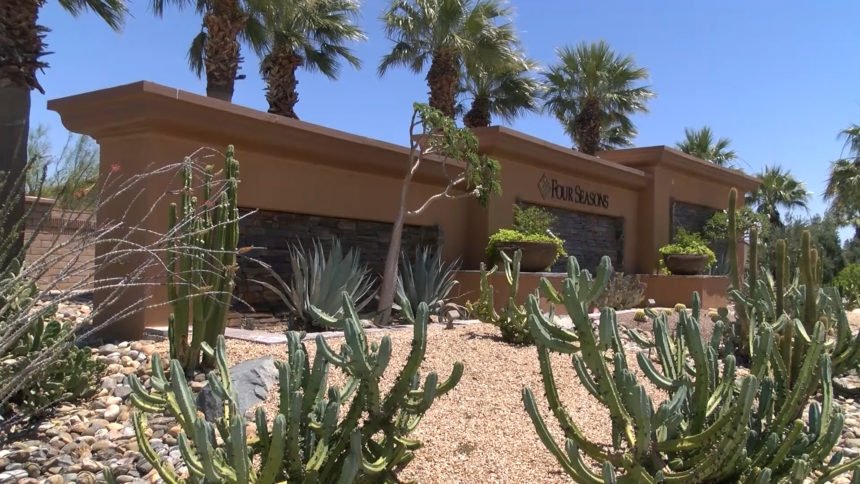 Retired Palm Springs resident Mark Sherman and his spouse Victor Poglinco enjoy their home in the Four Seasons community on the north end of Sunrise Way.

But, it’s what’s happening around their home is what their worried about.

“All we want is some action.  There is a lot of concerns.  This seems to be growing on all levels,” said Sherman.

Sherman says their biggest concern is speeding drivers on roads outside their gated community and sometimes street racing on Sunrise Way.

Sometimes they’re “spinning out” on the north end of the street and burning rubber and leaving behind “doughnuts”.

They say drivers are also driving too fast on East San Rafael Drive.

Sherman says they first brought their concerns to the police department and the city council in 2018 but say their complaints are “falling on deaf ears”.

“We call dispatch and we let them know and it’s like we might get there we may not.  We’re tired,” said Sherman.

Sherman says other concerns they’ve complained to police about more recently including people shooting target practice in the “wash area” nearby, people firing off illegal fireworks from surrounding neighborhoods, and graffiti and tagging.

Sherman says he and Poglinco moved to the neighborhood in 2013 from the Long Beach area.  He says they are now experiencing the problems they were trying to get away from.

We spoke with Palm Springs Police Sergeant Mike Casavan who says the department is aware of the problems and is working to address them.

Saying the department statistician was not in Monday, Casavan was unable to provide totals on calls from Four Seasons for reports of speeding drivers or gunfire.

But, he says since January, the department has sent officers to the community 21 times responding to calls for service, over and above their regular patrols.

“What typically happens I can’t say in every scenario, but a lot of scenarios, when someone calls for drag racing or hearing gunshots our officers will respond.  Definitely if someone calls we do respond,” said Casavan.

The Sergeant says he and his colleagues are happy to talk further with Sherman and Poglinco about their concerns.

The homeowners are keeping tracking of other complaints from their neighbors posted on the site NextDoor.com.

Casavan says adding any traffic control measures on the streets to better control speed is a decision that is up to the city council.

She provided this written statement to News Channel 3:

“I care deeply about the residents of Palm Springs and want to ensure they feel safe and comfortable in their homes. I have personally spoken with the City Manager, Police Chief, and residents about these issues. I will continue to keep residents informed of updates as we work to resolve these problems. I encourage residents to reach out to me if they have any concerns or questions. grace.garner@palmspringsca.gov”