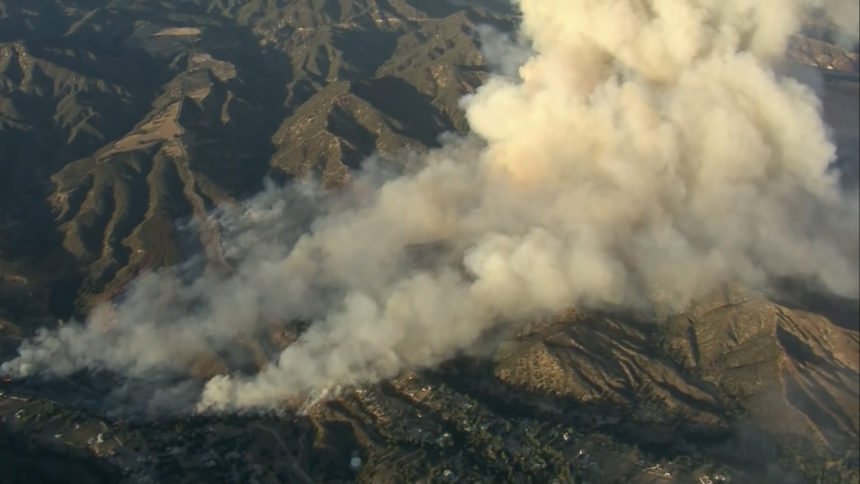 A wildfire in the Cherry Valley area remains 5% contained as of Sunday afternoon after exploding to 20,516 acres.

Mandatory evacuations have been issued to 7,800 people due to growing brush fires threatening homes in the Cherry Valley area.

At least one home and two outbuildings have been destroyed. No injuries have been reported. The cause of the fire remains under investigation.

Fire crews worked into the night as thousands of homes are threatened.

“We have family up there," said Umek. "We are all in a little canyon up there, so if it comes through, its not good and if the winds shift and brings it back thats our problem.”

More than 400 firefighters are battling the blaze in brutal heat conditions.

“Very physically demanding and challenging for firefighters," said Captain Fernando Herrera, CalFire Public Information Officer. "Some of the terrain up here is steep alot of fuel out here."

Crews were attacking it by air by dropping fire retardant and water as those on the ground continue to push through difficult terrain to gain the upper hand on containment.

“Being in an area thats not necessary easily to access and bring ground troops in makes it very difficult to surround the fire and very dangerous so we rely alot on our aircraft," said Herrera.

Several dozen fire engines have been deployed including help from nearby agencies.

“We have groups disperse throughout the entire perimeter, the entire footprint of the fire working day and night," said Herrera.

CalFire spokesperson said the battle to contain this fire will be a long one.

“Understand that this fire is a long term fire now," said Herrera. "We are here, and we are going to settle down for the next week at minimum this is not a fire we can put out in the next 24 hours.”

Several EVACUATION ORDERS and warnings remain in place. Please visit https://t.co/NNPcufL1ea to search if your address is in an evacuation area. pic.twitter.com/qyV6NMUUqT

Multiple valley residents have reported seeing the smoke here in the area.

An Evacuation Center is at Beaumont High School

An interactive map, where you can search the status of your address can be found at https://t.co/2S9I5zv25f. https://t.co/ouQu1CM3IT