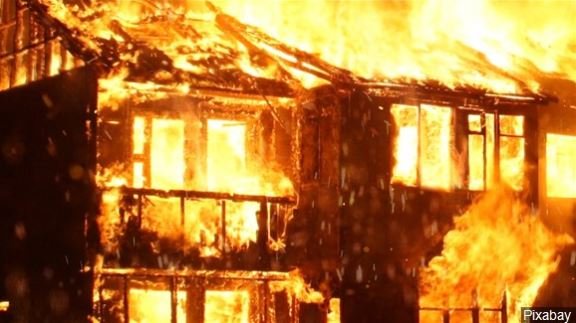 A 17-year-old from Twentynine Palms was arrested on arson charges Sunday night after allegedly setting his parent's home on fire.

According to the San Bernardino County Sheriff's Department, deputies assigned to the Morongo Basin Station were called to a report of a fire on the 700 block of Canyon Road at around 8:25 p.m.

Deputies learned that the incident stemmed from an argument between the resident and their 17-year-old son over an "electronic device." There was no further description on the electronic device but authorities say the argument caused the teen to threatened to physically harm his parent and set fire to the home. The threat caused the parent to flee the area in fear.

Shortly after, several residents called 911 to report a fire at the property. Arriving deputies found the home fully engulfed in flames.

The teen was found nearby trying to flee the scene in an "off-highway vehicle." The teen was taken into custody without incident. Detectives from the Bombs and Arson Division responded to assume the investigation at the scene.

The teen was arrested for criminal threats and arson and has been transported to San Bernardino Juvenile Hall.

Anyone with information related to this investigation is asked to contact the San Bernardino County Sheriff's Department Morongo Basin Station at (760) 366-4175. Anyone wishing to remain anonymous may contact We-Tip at 1-888-78-CRIME.