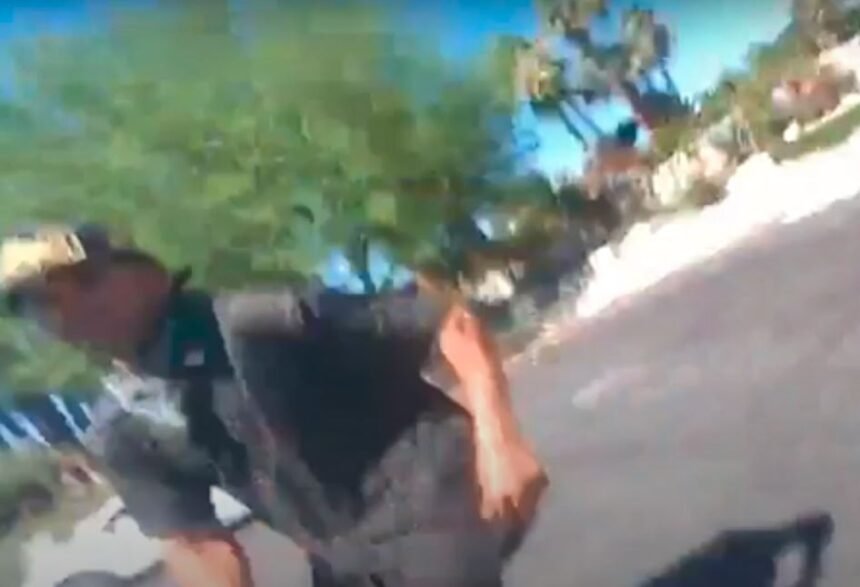 On Monday the Riverside County Sheriff's Department released body cam footage of a deputy-involved shooting, after a deputy was stabbed last month in a Rancho Mirage neighborhood.

The call came in at around 2:38 p.m. on August 7, after a caller reported 'suspicious activity' on the 70800 block of Tamarisk Lane, a neighborhood behind the Sunnylands Estates, in Rancho Mirage.

A transcription of the dispatch all was released saying that "it occurred 10 minutes ago, reference unknown subject who entered RP’s (reporting party’s) backyard asking to use her phone."

According to the sheriff's department, a deputy arrived a short time later and located 2 men at the end of the street.

"As the deputy parked his patrol car he activated his body-worn camera and exited his vehicle. As he walked toward the two men, almost immediately, one of the men later identified as Jeffery Monroy, attacked our deputy and began stabbing him with a screwdriver in the torso, head and neck," Riverside County Sheriff, Chad Bianco.

Bianco went onto say that during the violent confrontation the deputy's body camera became deactivated.

"Even though the body-worn camera was deactivated during the attack, several witness statements described how the deputy retreated backward using his hands to cover and shield his face and stabbed by Mr. Monroy," Bianco said.

According to the sheriff's department, the suspect attacked a second time and that's when the deputy opened fire, killing Monroy at the scene.

"I was in the house and I heard pop, pop, pop about 5 times," said Rancho Mirage resident, Larry Profeta.

By the time Profeta ran outside, deputies had swarmed the scene.

"The next thing I saw was all the police cars come- many, and then all of a sudden they roped off the road and I did walk back there and I saw the body of a guy laying on the driveway," said Profeta.

Some neighbors who live nearby were surprised a crime like this happened so close to home.

"It’s very disturbing in one sense but very- I feel very comforted that the sheriff's department was so fast to react," said Profeta.

"I looked at it as an isolated incident, didn’t think much of it except it’s not usual for any place to have that kind of activity," Rancho Mirage resident, Stuart Rosenthal said.

Authorities identified the suspect as Jeffery Monroy, 33, of Cathedral City.

The deputy was hospitalized and released the next day.

"This incident, like all deputy-involved shootings, will be reviewed by the Riverside County District Attorney’s office. Additionally, our department will internally review and evaluate the actions of our deputies with our policy and training standards," Bianco said.