Derek Chauvin’s defense team highlighted George Floyd’s arrest and drug use in May 2019 in court on Tuesday after the prosecution rested its case against the former Minneapolis Police officer.

The defense’s first witness was retired Minneapolis Police officer Scott Creighton, who testified that he approached Floyd on the passenger side of a red Ford Explorer on May 6, 2019. He ordered Floyd to show his hands and put them on the dash, and he said Floyd was unresponsive and non-compliant to his demands.

In body-camera footage of the incident, Creighton offers increasingly loud commands with curses at Floyd, who appears distressed and tells the officer he doesn’t want to get shot. Creighton pulled his service weapon in the encounter.

“He keeps moving his hands around. He won’t listen to what I have to say,” Creighton says in the footage.

The officers on scene handcuff Floyd, and he walks with them away from the vehicle.

The second witness, retired paramedic Michelle Moseng, testified that she treated Floyd medically after the arrest. He told her he was addicted to opioids and had been taking multiple Percocet pills every 20 minutes that day, including as an officer walked up to the car.

She found Floyd had a high blood pressure reading of 216 over 160 and recommended he be taken to the hospital.

Floyd was taken to the hospital and not jail. A CNN search through Hennepin County District Court records ​shows that he was not charged in relation ​to the 2019 arrest.

The testimony is, at least ostensibly, part of the defense’s argument that Floyd died of drug and health problems on May 25, 2020, rather than due to Chauvin’s actions. Defense attorney Eric Nelson has also argued that Chauvin’s use of force was ugly but appropriate and that a hostile crowd of bystanders distracted Chauvin from taking care of Floyd.

However, Floyd’s drug use and arrest in May 2019 could unfairly bias the jury, so Judge Peter Cahill allowed limited evidence of the incident only to show the physical effect of opioid drugs on Floyd.

The defense’s case began Tuesday after Minnesota prosecutors called 38 witnesses over 11 days. The defense sped through five witnesses before lunch, including a passenger in the vehicle with Floyd last May and an officer who responded to the scene. In the afternoon, a use-of-force expert testified that Chauvin’s actions were justified.

Prosecutors have sought to show that Chauvin used excessive and unreasonable force when he kneeled on the neck and back of George Floyd, who was handcuffed and lying prone in the street, for nine minutes and 29 seconds last May.

Chauvin, 45, has pleaded not guilty to second-degree unintentional murder, third-degree murder and second-degree manslaughter charges. The defense’s case is expected to last only a few days, and closing arguments are expected for next Monday, Cahill said Monday.

While the trial has focused on Chauvin and Floyd, the societal stakes of the high-profile case were made vividly clear when police shot and killed a Black man Sunday in the Minneapolis suburb of Brooklyn Center, just 10 miles from the courthouse where Chauvin is standing trial.

On Monday night, police fired tear gas and stun guns to disperse demonstrators defying a curfew outside the Brooklyn Center Police Department, while protesters threw “bottles, fireworks, bricks and other projectiles at public safety officials,” according to a tweet from Operation Safety Net.

Barry Brodd, a use-of-force expert and former police officer, testified for the defense that Chauvin was justified in his actions with Floyd and did not use deadly force.

“I felt that Derek Chauvin was justified and was acting with objective reasonableness following Minneapolis Police Department policy and current standards of law enforcement in his interactions with Mr. Floyd,” Brodd said.

He said he did not consider putting Floyd in the “prone control” position on the ground to be a use of force. He even suggested that it was safer for the suspect because if they get up and fall they might hurt their face.

“It doesn’t hurt. You’ve put the suspect in a position where it’s safe for you, the officer, safe for them, the suspect, and you’re using minimal effort to keep them on the ground,” Brodd said.

He said it didn’t matter that Floyd was already handcuffed because any person resisting should go to the ground in a prone control position.

He said that officers didn’t flip Floyd on his side into the recovery position because there was limited space, traffic was passing by officers, and the crowd of bystanders distracted them — which he described as “relatively valid” reasons.

“Shown in this picture, that could be a use of force,” Brodd said.

He said he was not specifically aware of Minneapolis Police Department’s definition of force, which defines force as a restraint that causes injury or pain. He also acknowledged that putting someone in the side recovery position is simple and quick.

At one point, Brodd said Floyd was resisting officers for a “couple minutes” after being taken to the ground. Prosecutors then played several video clips of Chauvin kneeling on Floyd, and Brodd said he wasn’t sure if Floyd was struggling with police or writhing on the ground.

“I don’t know the difference,” he said.

Brodd said he has testified in court 10 times since 2016. In 2018, he testified in the trial of Jason Van Dyke, the Chicago Police officer who was ultimately convicted of murdering 17-year-old Laquan McDonald. In that case, Brodd said the shooting was justified and even demonstrated a point by running at an attorney with a toy knife, according to CNN affiliate WBBM.

Shawanda Hill, Floyd’s friend and a passenger in the vehicle when he was arrested last May, testified that Floyd was “happy, normal, talking, (and) alert” when she saw him at the Cup Foods corner store. He offered to give her a ride, so she got into the back passenger side of the vehicle he was driving.

Store employees came to the vehicle to discuss a suspected counterfeit $20 bill Floyd had used, but he was sleepy, hard to wake up and wasn’t that coherent, she testified. When police arrived to the vehicle, she again tried to wake up Floyd, she said.

“I kept saying, baby get up the police is here. So he looked, and we look to the right and the police tapped on the window with the flashlight,” she testified. “When he seen the man, the man had a gun at the window when he looked back to him. So he instantly grab the wheel, and he was like, ‘please please, don’t kill me! Don’t shoot me!'”

Floyd was “very” startled by the officer with his gun out, she said. He did not complain of shortness of breath or chest pains and was not acting abnormal, she testified.

Minneapolis Park Police Officer Peter Chang testified Tuesday that he drove to the scene of Floyd’s arrest last May after he heard a dispatch call for additional help.

Upon arrival, Chang was asked to watch over Floyd’s vehicle and keep tabs on the two passengers who had been with him, Hill and Morries Hall, according to more than 25 minutes of Chang’s body-camera footage played in court.

The three of them stood across the street from where Chauvin kneeled on Floyd and so only partially saw what was going on in front of Cup Foods. In court, Chang testified that he heard the bystanders on scene yelling.

“The crowd was becoming loud and aggressive, a lot of yelling across the street,” he said. “I was concerned for the officers’ safety too, so I kept an eye on the officers and the car and individuals.”

On cross examination, Chang noted to prosecutor Matthew Frank that when he arrived, he heard on the radio “code four,” which indicated the scene was safe. Floyd was seated on the sidewalk before officers tried to put him in the police car, and Chang told jurors during that time Floyd was peaceful and not agitated. Floyd gave his date of birth and full name to officers, he said.

A Minneapolis Police officer and medical support coordinator who previously testified for the prosecution retook the stand to discuss how officers are trained to treat excited delirium.

Officer Nicole Mackenzie testified that excited delirium is a condition with a variety of conditions, including psychosis, agitated delirium, superhuman strength and hypothermia. She said officers dealing with excited delirium are trained to get more resources, physically restrain the suspect and call for emergency help because they can quickly go into cardiac arrest.

On cross-examination, Mackenzie testified that one of the things that officers are told to do during training is to roll suspects on their sides because excited delirium can compromise breathing.

Excited delirium is a controversial diagnosis that is not recognized by major medical organizations such as the American Medical Association, the American Psychiatric Association or the World Health Organization. Even so, a medical expert for the prosecution testified last week that Floyd showed none of the 10 signs of the condition.

The training class on excited delirium was taught at the police academy to former officer Thomas Lane, but Judge Cahill told the jury there is no evidence Chauvin took the class. Mackenzie’s testimony was allowed solely to show what Lane may have meant when he mentioned excited delirium during Floyd’s arrest.

The prosecution’s case in three parts

The first week of testimony largely focused on Floyd’s final moments and the distressed bystanders who watched Chauvin pin Floyd to the street. Video from the bystanders and police body camera footage showed Floyd’s gasps for air and calls for his “mama” over those excruciating minutes, leaving several witnesses in tears.

The medical testimony on Thursday, Friday and Monday, particularly from Dr. Martin Tobin, laid out the mechanics of how Floyd died. The renowned pulmonary critical care doctor testified Thursday morning that Floyd died from a “low level of oxygen” when Chauvin pinned him to the street and restricted his ability to breathe.

One of the final witnesses to take the stand on Monday was Floyd’s brother Philonise, who cried as he described his brother aas a big mama’s boy who was distraught by her death in 2018.

“It was so unique how they were with each other. He would lay up onto her in the fetus position like he was still in the womb,” he said. “Being around him, he showed us how to treat our mom and how to respect our mom. He just — he loved her so dearly.” 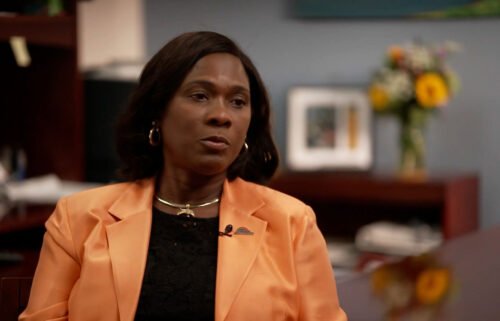