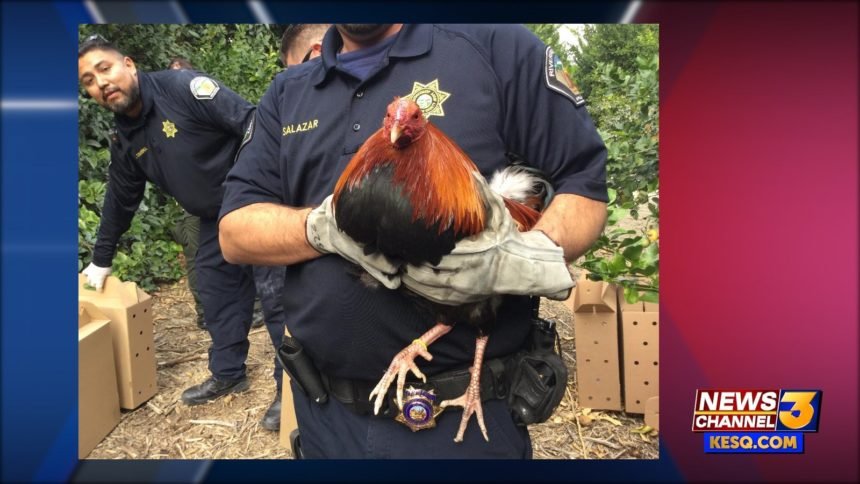 According to John Welsh, public information specialist for RCAS, at 7:40 a.m., the Riverside County Sheriff's Department alerted animal services to an illegal cockfighting operation "set up deep inside some lemon orchards near avenue 77 and Polk Street."

Welsh writes that it does not appear that anything had started yet because deputies were able to discover it so early.

"This was likely going to be a huge cockfighting ring — but it was discovered so early in the day that nothing terrible had happened yet," said Animal Services Sgt. Miguel Hernandez. "There were still people driving into the area an nearby, but once they noticed the heavy law enforcement presence, they left the scene."

Animal control officers impounded and euthanized 16 cockfighting birds. The department believes there were more birds at the scene, however, many participants fled the area with their birds. Some birds were hidden underneath heavy blankets.

No citations were issued, however, the Sheriff's Department impounded seven vehicles that were likely used by participants.

Hernandez added that the cockfighting ring was with tarps, "as if to prevent it from being discovered from above."

Cockfighting is illegal in California and even those attending such events can be cited by law enforcement.

A little over a week ago, the Desert Hot Springs City Council unanimously passed an ordinance that would ban roosters within city limits. There were a number of reasons for this, but one of them was the discovery of dead rooster who had a spur attached to his leg. Police Chief Jim Henson says the kind of spur found on the rooster is associated with cockfighting.

Read: Roosters could soon be banned in Desert Hot Springs