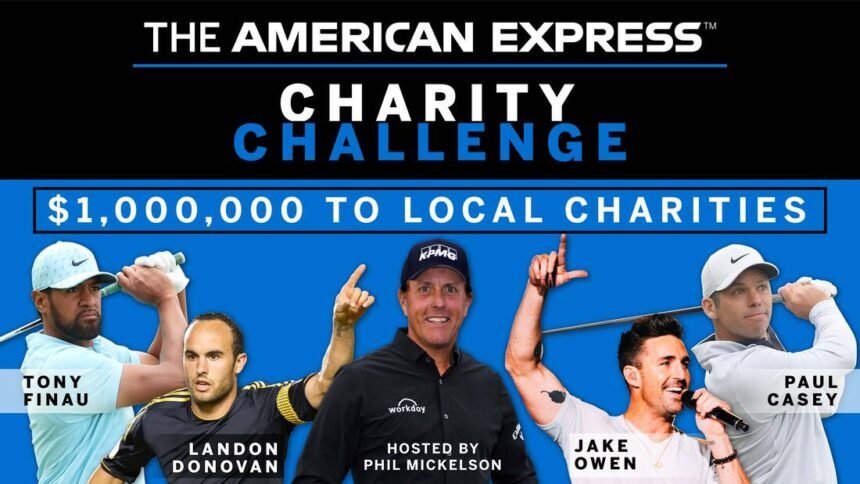 44-time PGA TOUR winner and World Golf Hall of Fame member Phil Mickelson will emcee as Finau and Donovan team up against Casey and Owen in a $1 million match benefitting local charities.

The American Express Charity Challenge will be broadcast live by Golf Channel, PGA TOUR LIVE, GOLFTV, and on social platforms on Wednesday, January 20, at 2 p.m. PT.

In addition to serving as host and emcee, Mickelson will participate in the match through “Phil’s Challenges.” Mickelson will challenge Finau and Casey throughout the match at his discretion and can include long drives, closest to the pin or even trick shots. If the challenged player beats Mickelson, money will be donated to their charity initiative, but if they lose the challenge the money will go to the other team’s charity initiative.

When the match reaches the second to last hole – the par-3 17th hole known as Alcatraz – each player, including Mickelson, will get a shot at a one-million-dollar hole-in-one for charity. For any player that makes a hole-in-one, an additional one-million-dollars will go to Coachella Valley charities.

Since its introduction in 1960 as the Palm Springs Golf Classic, the tournament has generated more than $60 million for numerous nonprofit organizations dedicated to supporting Coachella Valley residents.

In December, the tournament announced that a $1 million donation had been distributed from the 2020 event to local Coachella Valley charities.

The 2021 American Express tees off on Thursday!

Showcasing its best player field in recent history, The American Express includes seven of the top 20 players in the Official World Golf Ranking, a dozen major champions and 14 past tournament champions, including every winner dating back to 2012, and 12 of its most recent 13 champs.

Be sure to watch News Channel 3 all week and check out our American Express section for full coverage.