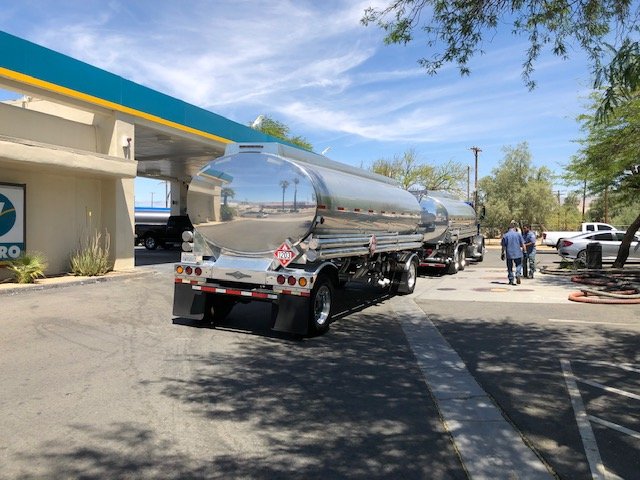 Tank truck drivers who deliver gas like those delivering to a station in Thousand Palms are in short supply.

That's why industry experts say we could see shortages at pumps in some locations this summer. putting upward pressure on prices.

"It impacts my wallet. It costs me more every time I travel somewhere," said motorist and former truck driver Walt Scartacinni, who was filling up the tank on his SUV.

Scartacinni  knows the industry well and is not surprised by what's happening.

Tank truck drivers, who require hours of special training and licensing, left the industry when demand for gas plummeted during the height of the pandemic.

Also, schools where the drivers train were closed in response to Covid-19.

"It's hard to find cross country drivers. You're away from home. You have a family. It's difficult. It's difficult on the drivers, very much so," said Scartacinni.

Without enough drivers, an estimated 20 to 25 percent of tank trucks in the U.S. are parked, compared to only 10 percent being idle in twenty-19, according to the trade group National Tank Truck Carriers.

It's happening while people around the country, mostly confined at home for the past year are venturing out.
Many are now looking ahead to summer road trips.

"I guess we better get used to staying at home, you know," said Desert Hot Springs resident Benjamin Guzman.

News Channel 3 has not received any reports of gas shortages here in the valley, but experts say the areas at highest risk are vacation hot spots, including Florida and Arizona, where shortages were reported during recent Spring Break periods.

Sandeep Chandi, the owner of the Arco AMPM in Thousand Palms said it's the smaller and independent stations where gas shortages will appear first when supply problems occur.

"Their supply chains are not as reliable as the bigger players," said Chandi.