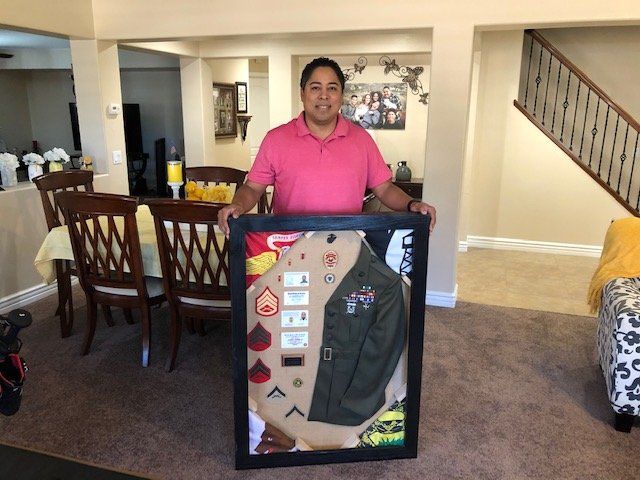 A friend captured the footage showing Marine Corps Chief Warrant Officer Jeff Gonzalez packing up and saying goodbye to his family at their home at Camp Pendleton in 2012 as Gonzalez and his unit deployed to Afghanistan.

It was one of several combat missions there and in Iraq for the father of five over 21 years of active duty.

Much of that time he worked in counter-terrorism.

“Combat is super tough.  You learn to deal with it.  But it’s the effects after combat.  No one teaches you about those things,” said Gonzalez.

Retired from the Marines, Gonzalez is now a full-time pastor.

But the scars of war remain.

Struggling with PTSD in 2014, he says he nearly committed suicide.

“I remember falling to my knees and getting into the fetal position.  I’m thinking why am I feeling this way?  I need to snap out and I couldn’t,” said Gonzalez.

Gonzalez Credits “God’s grace” for making it through his “dark period”.

Unfortunately, the outcome was not the same for ten of his friends who did take their own lives, including Gunnery Sergeant Vaughn P. Canlas.

“I remember how Vaughn used to joke around.  He’d play the straight face, and all of a sudden start cracking up,” said Gonzalez.

The key for a veteran or anyone struggling with suicidal thoughts says Gonzalez is to simply reach out for help.

“One of the strongest things you can do is be vulnerable,” said Gonzalez.

As part of his efforts to help other combat veterans, Gonzalez hosts a weekly radio show here in the desert talking about his own struggles with PTSD and suicidal thoughts.

By sharing his own story, Gonzalez simply hopes to save others.

“The way I honor the dead is be serving the living,” said Gonzalez.

According to the U.S. Department of Veterans Affairs, 17 veterans commit suicide every day.