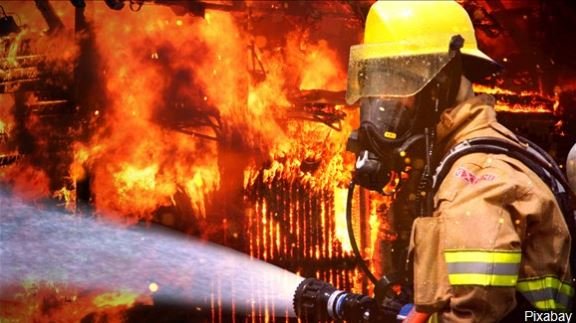 “I heard the fire trucks," said Pat, a neighbor who witnessed the blaze. "There were three of them," she added.

Many neighbors living at the apartments on the 77000 block of California Drive and Indiana Avenue in Palm Desert woke up to the sound of sirens around 6:30 a.m.

A next door neighbor to the apartment that caught on fire described the scene.

“The smoke alarm was going off," said Ross Burwen. "Which happens every so often with this neighbor, Burwen added. "And within a few minutes I heard sirens and I opened my front door before the fire trucks got here. There was smoke coming out of the door and windows. And the next thing you know they are here and barging in," he said.

“Then all of a sudden I saw smoke coming out of one of the apartments and then at one point I saw two firefighters on top of the building and then there were three firefighters and they were punching holes in the roof,” Pat added.

Though the cause of the fire is still under investigation, Burwen tells us what he believes started the blaze.

“Dropped a cigarette on the carpet or something and the next thing you know the place is on fire,” he said.

As for his apartment and the others surrendering it, thankfully no other apartments were affected.

“The fire department got me out and made sure everything was okay before I got back in,” Burwen said.

Neighbors described the man who lived inside as elderly. He was taken to a nearby hospital with moderate injuries. There was no immediate word on his identity or condition.

Stay with News Channel 3 for any updates on this story.