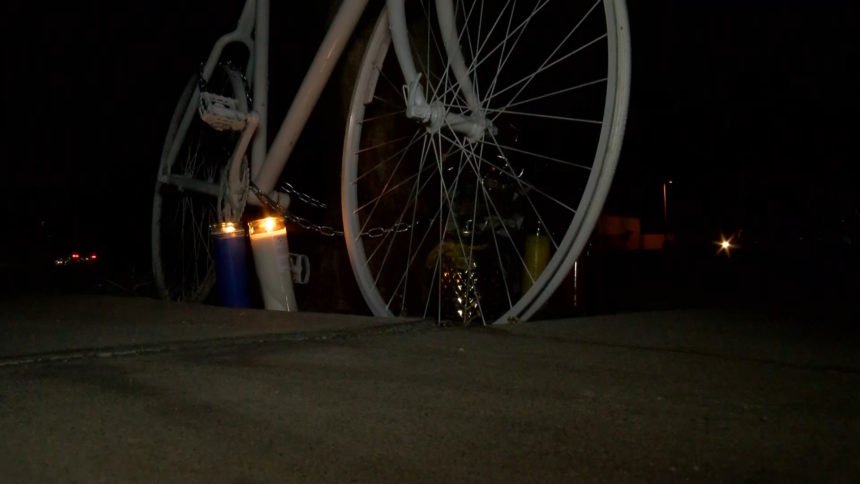 A memorial marking the scene of a deadly hit-and-run crash in honor of a bicyclist who was killed last year in Palm Springs was stolen, and the family of the victim is now searching for a replacement.

30-year-old Raymundo "Ray-Ray" Jaime was hit by a car and killed while riding his bike on S. Palm Canyon on Oct. 21. It was dark, and the driver never stopped. He leaves behind his wife, Desiree Ayala-Jaime, and 4-year-old daughter Karlee.

"For them to still be out there and living life like nothing – it's very upsetting," said Ayala-Jaime. "I want them to come forward. I want them to turn themselves in."

Following the accident, the Coachella Valley Bike Coalition made arrangements with Jaime's family and the city of Palm Springs to mark the spot with a roadside 'ghost bike' memorial, showing the community's support for his family and calling attention to what they said is a dangerous stretch of road.

But just a few months after the deadly collision, the ghost bike is gone. Jaime's family returned to the scene Monday night to put up a new memorial, and to ask for the public's help in finding a new bike.

If you'd like to help with a bike donation, email jake.ingrassia@kesq.com. The bike can be non-functioning.

"He did not ride that bike but it was in memory and honor of him," Ayala-Jaime said. "When I heard it was stolen, it was like how much more pain can I be in? ... It was all I had left, looking forward to having something of him and it's gone. It hurt bad. I cried."

It's a loss she says her daughter is still struggling to make sense of. And with no new leads from the police, she said all she can do is keep his memory alive.

"I just want to show him that there's still people that care.," Ayala-Jaime said. "Even though he's gone, we still love you; we're always going to be here."

Police are still searching for a suspect. They say the driver in the hit-and-run drove a dark colored compact car.