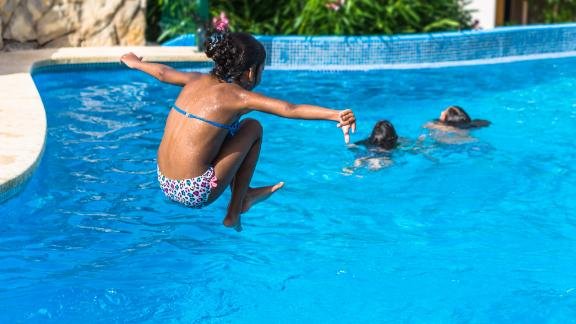 The play area at Civic Center Park in Palm Desert is empty and taped off.

It could be several more days before we see children from the day camp nearby playing at the park.

The day camp is put on by the Desert Recreation District at the Palm Desert Community Center.

“We definitely realize that it is an important service for all the people that live in our communities that we serve and we want to be able to reopen those as quickly as possible but it also needs to be done safely,” said Furon.

Furon and her colleagues at the district say they’re now preparing to open their day camps also put on at recreation centers in Indio and Coachella.

At the start of every summer for decades, children have been enjoying the day camps, attracting upwards of 120 children.

They are places to keep children occupied and supervised while parents work.

But Furon estimates most likely the camps won’t be ready until roughly mid-July at the earliest because of work that still needs to be done.

“We miss seeing everybody, we miss that interaction.  A lot of people who work here it’s a passion for them,” said Furon.

To comply with state and county guidance aimed at preventing the spread of coronavirus, the district must first acquire more cleaning supplies, re-hire part time staff, and the get staff trained on new cleaning and sanitizing procedures.

Furon says the day cares at this community center and the others will most likely have to double in size to keep track of children spread out over larger playing areas.

Thats to comply with social distancing required at the camp.

Facial coverings for children and staff will also be required.

“I think it’s a good idea to go back,” said Kaylah Krause.

“I feel like if they say it’s okay to reopen then it’s a good idea,” said Bianca Maldonado.

Furon says the district’s fitness centers are expected to open in about 3 weeks.