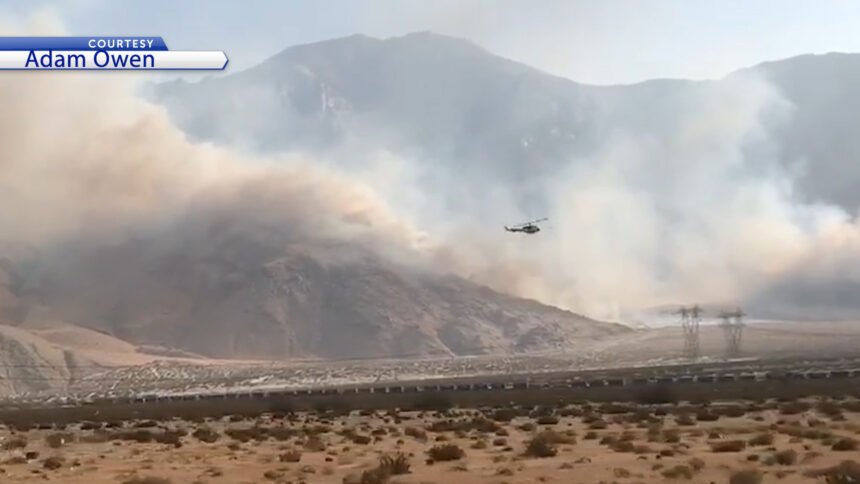 Firefighters continue to battle the flames Friday in the Snow Fire. It's been burning at high elevations.

The challenges of the Snow Fire

CalFire officials say their main challenges fighting the flames on Friday are the triple digit temperatures, low humidity, and especially the winds. Gusts are measuring 20-40 miles per hour at the ridgetop, says Captain Fernando Herrera.

"As we talk," Herrera said, "Air tankers are painting red retardant line completely around the higher elevation to keep it boxed in so it doesn't move forward downward into the Highway 111 corridor, threatening the Windy Point community."

The helicopters are also being used to "mop up" around the areas firefighters worked to douse overnight.

A battle to save homes

Overnight Thursday into Friday, it was a defensive battle to save homes.

"Last night we had a really challenging, hard night," Herrera said,"with fire backing down into the Snow Creek community, threatening a lot of those homes."

Herrera says firefighters were set up overnight for structure defense and says they were successful in saving the homes from the threat of fire.

Do you need to evacuate? Put your address in the map below to find out more information.

According to the California Highway Patrol and CalFire, a vehicle caught on fire on Snow Creek Road at around 2:36 p.m. Thursday afternoon. It's unclear what started the car fire, but the flames were spread quickly due to the wind and dry conditions.