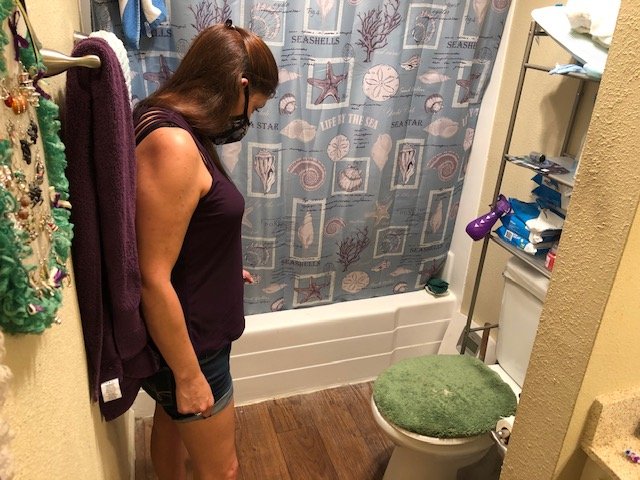 The mat in front of her apartment door reads "home sweet home", but for Karen Robinson the place where she has lived for three years has been anything but.

Just outside her door, in the stairwell, a vomit stain is left behind weeks after someone got sick.

The original spill was captured on her camera.

She also pointed out what she says is feces on a wall, based on the way she says it smells.

Urine stains, also with an odor, are left behind in several walkways.

"Nobody should have to live in throw-up, urine and feces, walking all over it, tracking it, especially in the middle of a pandemic," said Robinson.

Problems inside her apartment include a ceiling fan Robinson says won't turn off, a switch she touches with a stick because she says it gives off a shock, and a toilet and tub she says leaks.

"It is beyond frustration. I feel crazy. I cry at night. I can't eat," said Robinson.

Her problems include an air filter she says hasn't been changed for three years and leaks under her kitchen sink.

She also has problems with urine in the walkways.

Sanford says she has slipped on it twice.

"I slipped on pee. I had pee all over myself. I had to go back upstairs and change. I was an hour and a half late for work," said Sanford.

Robinson says she first started complaining about problems inside her unit two years ago, and the issues in the common areas about a year ago.

She called the apartment manager, and even the property owner, Investment Concepts.

A representative for Investment Concepts turned down our request for comment.

The out-of-work bartender says she also called the county housing authority, but says all the calls for help were ignored.

"I feel bad that they are not doing their job and that I have to go to this extreme," said Robinson.

A business card was left behind by a Palm Springs Code Enforcement Officer who stopped by last week, about 4 months after Robinson says she first called the department.

He says they'll go back to the apartments to see what they can do to help resolve the complaints.