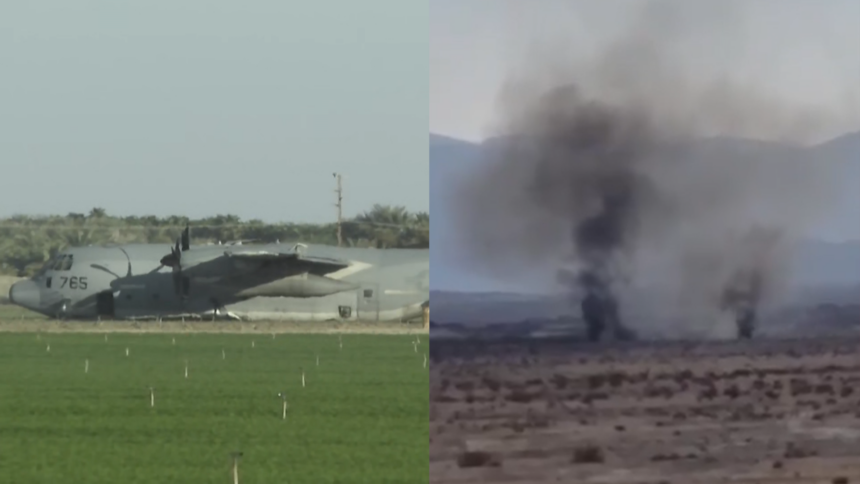 Nine people are safe after a military cargo plane clipped a fighter plane mid-air above Thermal Tuesday afternoon. The cargo plane made an emergency landing in a farm field there, while the jet crashed in the desert near Salton City.

UPDATE: Military officials confirm a fighter crashed near Salton City during air-to-air refueling, causing another military aircraft to make an emergency landing in Thermal. @JakeKESQ will have the latest tonight at 10 and 11 p.m.

Military officials said it happened during an in-flight refueling operation.

The cargo plane, a KC-130 tanker, appeared to have two of its propellors missing. Fuel was seen leaking out of its wing.

The Marine Corps said there were eight people on board; all were reported to be safe following the emergency landing.

The F-35 jet crashed deep in the desert area west of the Salton Sea. The military set up a 1-mile perimeter surrounding the wreckage. The pilot of that aircraft ejected out, parachuted to the ground and is now being treated for possible injuries.

#BREAKING A plane made an emergency landing in a farm field in Thermal just East if the airport. Early reports of 8 on board. It reportedly clipped another plane mid-air. We are live in scene wirh the early details. @KESQ pic.twitter.com/b4rDWJgoat

The official cause of the crash remains under investigation. Stay with News Channel 3 for more updates.