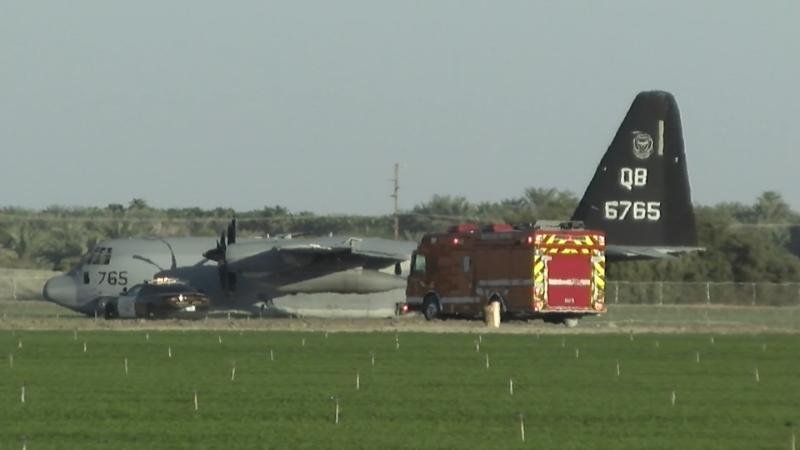 Recordings from LiveATC.net document the moments after a military cargo plane clipped a fighter plane mid-air above Thermal Tuesday afternoon.

You can hear the pilot declare an emergency. The pilot says that both of their engines are out, the plane is leaking fuel, and is possibly on fire.

The cargo plane made an emergency landing in a farm field in Thermal, while the jet crashed in the desert near Salton City.

Military officials said it happened during an in-flight refueling operation.

The Marine Corps said there were eight people on board; all were reported to be safe following the emergency landing.

"We do have an aircraft down on fire, unknown what it is. we did witness a black hawk type helicopter landing at crash site looking for possible survivors," said emergency crews on-scene.

"There's also going to be multiple others, looks like military helicopters and aircrafts in the area. one of their black hawks just landed on the ground."

"That's a helicopters. what they're talking about there. so it sounds like maybe one of their search and rescue helicopters landed looking for either survivors or, you know, landed at the crash site," said Bell.

Marines said the pilot of an F-35B fighter jet ejected before the fighter jet crashed near Salton City Tuesday afternoon.

"The aircraft is completely disintegrated"

"So far we don't have any patients or bodies, we are still looking. we are also trying to locate where the parachutist possibly landed"

Nearby in Thermal, the cargo plane KC-130 made an emergency landing all eight crew members and the jet pilot are safe.

Military personnel continued to investigate the area Wednesday. Bell said it could take days to move that plane.

"Because it's an aggregate active agricultural field, they're going to probably do quite a bit of mitigation, depending on how much fuel leaked out of the airplane. that was a refueling airplane. so it was full of gas. so who knows how much leaked out?," said Bell.