Photos from our crew show what appears to be burn marks around the plastic wrappings of Marilyn's upper torso. It appears that crews were working to clean up the burnt plastic of the famous sculpture.

Firefighters cleared the scene by 1 p.m., according to News Channel 3 crew at the scene. Captain Nathan Gunkel of the Palm Springs Fire Department told News Channel 3 that it was a very small fire caused by the welders working. The fire was out before fire units arrived on scene.

Aftab Dada, President of PS Resorts, the group that purchased for Forever Marilyn, said the fire started when a spark from wielding caught a fabric. The fire was put out in less than a minute, however, a spectator watching the assembly process called 911.

Dada added that crew say these kinds of fires can be common during the wielding process, especially during high temperatures.

The Forever Marilyn sculpture arrived at its new home on Museum Way in downtown Palm Springs on Wednesday. The 26-foot-tall, 34,000-pound sculpture of Marilyn Monroe made a cross country trip from New Jersey over the course of 8 days. The sculpture is scheduled to be fully assembled on June 17.

Forever Marilyn is set to be unveiled to the public with a special ceremony on Sunday, June 20 from 7 p.m. to 8 p.m. 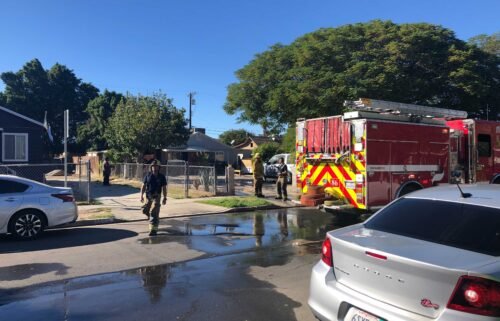