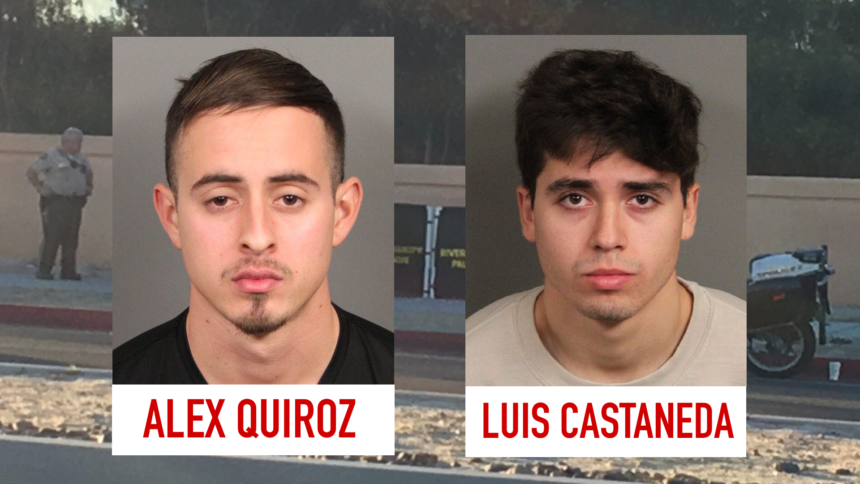 Two men wanted in connection with a crash that killed a cyclist in Rancho Mirage in 2018 were arrested Wednesday, according to county jail records.

According to a felony complaint released by the Riverside County District Attorney's Office on Tuesday, vehicular manslaughter charges were filed against 21-year-old Luis Armando Castaneda and 23-year-old Alex Isidro Quiroz.

On Thursday, the Riverside County Sheriff's Department released the booking photos for Quiroz and Castaneda to News Channel 3.

Quiroz and Castaneda were allegedly at fault in a high-speed accident that killed 32-year-old Cathedral City resident William Campbell on December 13, 2018. The collision was reported near the intersection of Ramon Road and Rattler Road.

The complaint also alleges that Quiroz fled the scene of the collision.

According to county jail records, Castaneda was taken into custody at 11:16 a.m. on Avenida El Pueblo in Cathedral City. He was booked into Indio Jail and is now free on $35,000 bail.

According to county jail records, Quiroz was taken into custody at 10:56 a.m. on Via Echo in Cathedral City. He is being held in Indio Jail on $80,000 bail.

News Channel 3 Chief Photographer Christopher Flicker witnessed the accident, which sent Campbell flying from his bike by the force of impact.

According to the California Highway Patrol, one involved driver admitted to speeding because the second driver was attempting to run him off the road. Neither driver was identified at the time of the collision and initial investigation.