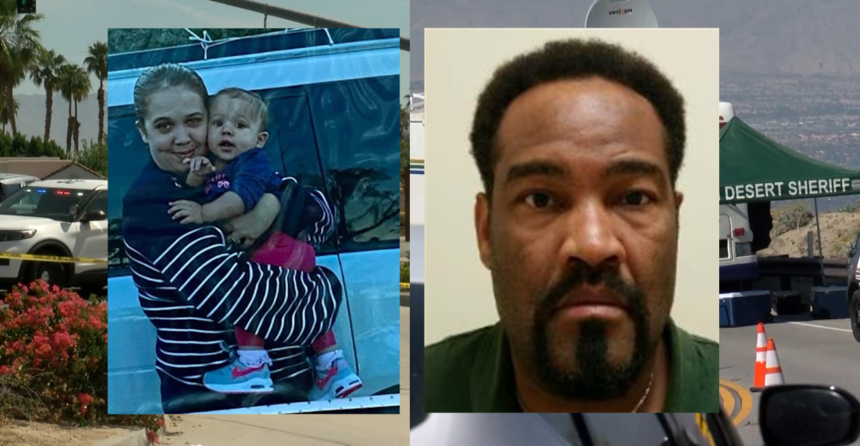 A Palm Desert father is accused of throwing his one-year-old daughter "over a steep cliff into a ravine" off Highway 74 in Palm Desert after a rollover crash on Wednesday, deputies tell News Channel 3. The child was found dead on the scene.

Deputies have identified Adam Slater, 49, of Palm Desert, as a suspect involved in both a domestic violence attack in Indian Wells and the death of the baby.

The investigation started at 8:30 a.m. Thursday, when deputies from the Palm Desert Sheriff's station responded to a reported stabbing on Washington Street in Indian Wells. According to a release, investigators "found a female victim with multiple injuries caused in a domestic violence incident." The female victim, now identified as Ashley Grome, was taken to a local hospital, per the release, and was in stable condition.

"He was being combative," the victim's uncle Chris Grome told News Channel 3's Jake Ingrassia, referring to Slater. "He attacked her and tried to stab her several times in the stomach and the throat. She fought him off and tried to protect herself."

Chris Grome says the suspect is married to his niece, who is 6 months pregnant with her second child.

Witnesses at the site of the crash went to help the occupants of the flipped car several hundred feet from the roadway, according to a statement from the Riverside County Sheriff's Department. Slater allegedly then "ran to the passenger side of the vehicle, where he stabbed a male who had assisted getting a young girl from the vehicle."

Police say that multiple witnesses said Slater took the girl from the arms of the male he had stabbed and "throw her over a steep cliff into a ravine," before running away into the canyon.

Slater was caught after a short foot chase. The child was located but found dead.

Family members have identified the child to News Channel 3 as "a little joy" named Maddie.

Ashley Grome is now fundraising online to raise money for a funeral for her daughter. You can see the fundraiser here. On the page, she wrote, in part:

"My daughter was the absolute love of my life and she meant everything and more to me. Everything I did and everything I will do for the rest of my life is for her. She was beautiful and her smile was contagious, even after a bad day, she always cheered me up. She was taken from this world way too soon."

Go Fund Me, Justice for Madalyn

Slater was transported to a local hospital for injuries from the collision. A bystander was also treated for injuries after assisting in the effort to detain Slater.

News Channel 3 found a listing for a registered sex offender in Palm Desert, identified as Adam Slater, on the California Megan's Law website. Family members of the victims have said Grome's husband is the one listed on the site.

According to the Megan's Law Website, Slater was convicted in 1995 and released in 1997. The offense is described as "sexual penetration of victim with foreign object by force."

The Sheriffs Department Central Homicide Unit is now continuing the investigation. Slater was arrested after being released from the hospital Thursday at approximately 6:48 p.m., according to county jail records. Deputies said he would be booked for murder upon his release from the hospital.

Stay with News Channel 3 for continuing updates on this developing news.

Family has identified the woman who they say was stabbed outside Southwest Church in Indian Wells. The family also confirmed the child found dead near a crash on Highway 74 was the woman's one-year-old daughter.

The Riverside County Sheriff's Department confirmed to KESQ Wednesday morning that a crime scene in the area of Highway 74 and Mile Marker 86 south of Palm Desert was connected to another crime site at Southwest Church in Indian Wells.

According to Sgt. Deanna Pecoraro, deputies were called to Southwest Church at around 8:30 a.m. and located a woman with injuries. During the investigation, deputies learned that a man had left the church parking lot in a vehicle.

Authorities wrote on social media that while no suspect was outstanding, they were asking the public to stay away from the Highway 74 area in Palm Desert. The sheriff's department also tweeted that there was no current threat to the public.

Sgt. Pecoraro later confirmed that this was related to a rollover crash on Highway 74. Pecoraro confirmed authorities located a deceased child near the site of the crash. A man was also detained.

Pecoraro could not confirm whether it was the suspect vehicle.

Highway 74 going up the mountain near Bighorn Golf Club was closed to traffic. Sheriff's deputies were allowing traffic down the mountain at the time to pass through, however, Caltrans shut down the entire roadway due to the investigation.

By 1:45 p.m., the CHP confirmed Highway 74 was back open with Caltrans providing pilot cars.

The investigation is currently on-going and no further information will be released at this time, according to the Sheriffs Department. If anyone has information regarding this investigation, they are encouraged to call Investigator Munoz with the Central Homicide Unit at 951-955-2777.