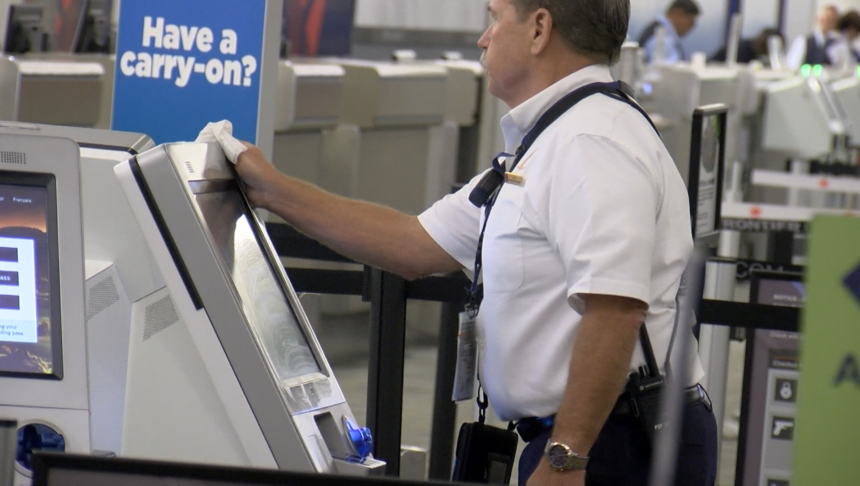 Frontier, Allegiant Air and Jet Blue have all received tentative approval from the U.S. Department of Transportation to suspend all of their flights at Palm Springs International Airport.

“I think it is probably necessary for them.  I mean financially, obviously it’s a good move,” said passenger and Las Vegas resident Frank Gaske.

The three airlines are among 15 carriers seeking exemptions from the Federal Government to suspend certain routes at more than 60 airports because it’s no longer profitable for the airlines to serve those routes.

The airlines are required to apply for the exemptions because of the CARES Act, which originally required airlines to maintain all routes in service prior to the coronavirus pandemic in order to receive federal financial assistance.

“Airlines need to do what they need to do to remain financially stable,” said Tom Nolan, Executive Director at the Palm Springs International Airport.

Nolan says collectively the three airlines currently account for a “single digit percentage” of all flights in and out of the airport.

“When they accepted billions of dollars they had service obligations.  When you are running a few people per flight, it doesn’t make sense,” said Nolan.

Nolan says he understands it’s a “business decision” for the airlines and he believes they’ll be back in service at the airport once passenger demand returns.

The pandemic has put a significant dent in passenger traffic at the airport.

Passenger traffic for April was down 97 percent compared to the same time last year.

The airport’s website lists a total of 7 airlines which are “currently operating”, including what Nolan calls the “legacy carriers” such as Alaska, American and Delta.

The list most likely growing shorter is not phasing travelers we spoke with.

“I’m not too concerned.  I figure they’ll bounce back.  I’m sure in a couple of months they’ll be back,” said Idyllwild resident Logan Schelly.

The Department of Transportation is taking public input on the proposed airlines service suspensions through May 28th.

There is no word yet on when a final decision will be made.

A representative for Allegiant Air provided this written statement to News Channel 3:

"Allegiant has not suspended service at PSP, though we have requested an exemption from the Department of Transportation (DOT) which would allow us flexibility to fly below their minimum service level if demand is low, so that we can minimize flying empty aircraft if possible.

If that exemption is granted, our intention is to continue flying our scheduled service between Palm Springs and Bellingham, WA.  At this time demand for that route has been impacted by the closure of the US-Canadian border, so there will likely continue to be occasions where single flights are canceled."

Representatives for Frontier and Jet Blue did not respond to News Channel 3's requests for comment.

“COVID-19 has disrupted our long term strategy to continue to grow air service into PSP. Air service is vital to the growth of tourism in Greater Palm Springs. More direct air service to PSP provides convenient and stress free access not only to leisure travelers but for meetings and conventions. When the timing is right and people begin traveling again, we will advocate to get these flights back.”