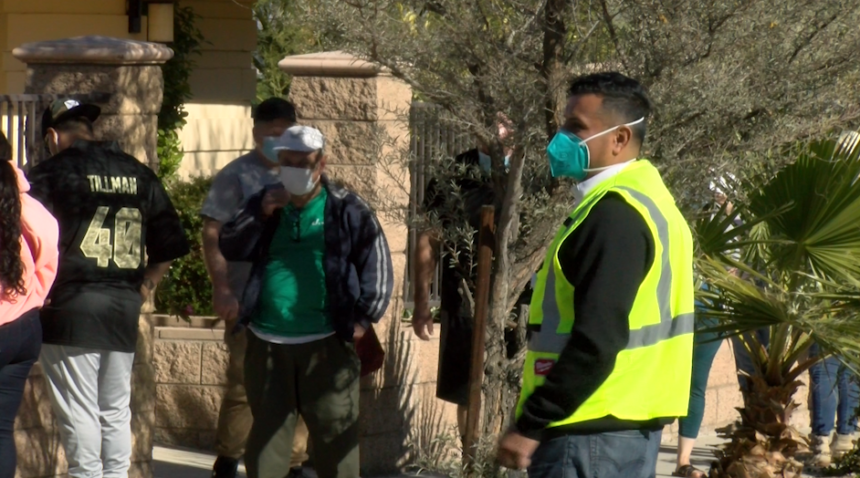 Hundreds of people lined up at St. Louis Catholic Church in Cathedral City the day after Christmas. Riverside County's Department of Public Health and Desert Healthcare District Foundation teamed up to hold the free pop-up event. No appointments were needed, although people were encouraged to register online prior to showing up. Those that did not register online were able to do so at the testing site.

"So far we’ve done about 300 tests and we have about another 200 people in line," said Desert Healthcare District Foundation Senior Program Officer, Alejandro Espinoza.

"We had about 100 people lined up when we showed up, so that is a great thing for us. As soon as we were set up folks were ready to go," said Espinoza.

As of 1 p.m. Saturday wait times were about an hour for people who were in line. Though the site provided an opportunity, some were frustrated that even upon registering, they'd have to wait that long.

"I was here earlier and a little after 9 and it was so crowded and I left. I left and I came back. I came back a little before 12," said Cathedral City resident, Becki Robinson.

Robinson registered prior to arriving at the church.

"You just come, you have your barcode, and you wait in line just like everybody else does, which is very frustrating," said Robinson.

Many people showed up for different reasons.

"Just for my own peace of mind," said one Cathedral City woman who only wanted to provide her first name, Tina.

Others have had a difficult past couple of days. Palm Springs resident Anthony Maniscalco was at the site to get tested in order to fly to New York.

"My mother just passed away Christmas eve in New York and I’m trying to be tested so I’ll be able to leave as soon as possible," said Maniscalco.

The testing site allowed people to conduct self-administered mouth swabs with "medical personnel that are actually supervising you as you do the mouth swab," said Espinoza.

The test results are expected to be returned within 2 to 3 days, according to Espinoza.

The site was provided at a time when Riverside County hospitals are under tremendous pressure. Christmas Day marked record hospitalizations of 1,335 and record ICU capacity of 267.

"I think it’s just very important for our community to get tested as often as possible. If you had a family event during the Christmas time just come out and get tested just to ensure that nobody in your family has tested positive," said Espinoza.

County health officials, however, remind the public that these are "point-in-time tests." Depending on when a person becomes infected, tests do not always detect the virus during the early stages of incubation.

Espinoza said both organizations are working to schedule similar testing sites in January.