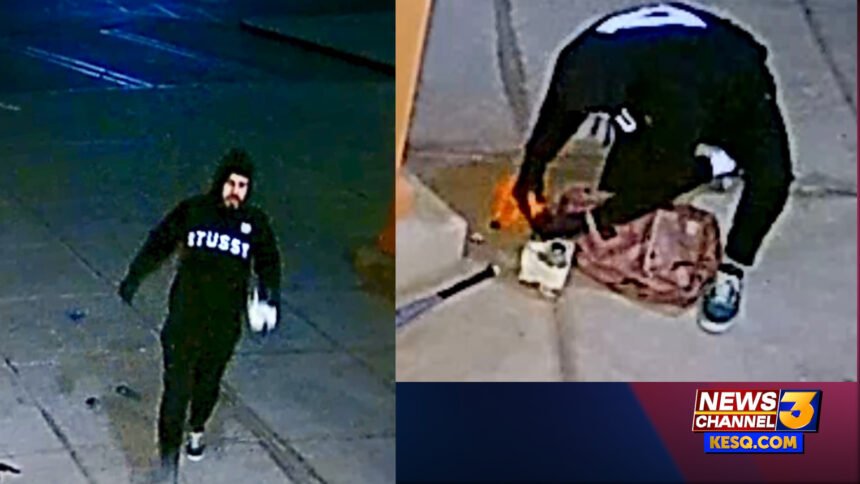 A Palm Desert man was in custody Thursday and has been charged with the May 31 firebombing of the East Valley Republican Women Federated (EVRWF) office in La Quinta, according to the Department of Justice.

Carlos Espriu, 23, was named in a federal criminal complaint that charged him with attempted arson.

Espriu was arrested by the Gang Impact Team in Indio on Wednesday at about 6:30 p.m., according to the Riverside County District Attorney's Office.

"Investigators determined that Espriu was attending a party in Indio on Sept. 9 and stopped a vehicle he was driving when he left the party," a district attorney news release said.

The criminal complaint alleged that on May 31, a masked Espriu used a metal baseball bat to break windows at the EVRWF headquarters, then "lighted an improvised incendiary device constructed of three bottles that he tossed through the windows before fleeing."

According to the complaint, Espriu then returned to the building a few minutes later and broke more windows. He then entered the building and retrieved the Molotov cocktails and walking away with the device.

He returned again about 30 seconds later, this time without a mask on, and threw the set of bottles once more into the building, which caused a fire to start.

The firebombing caused limited damage to the EVRWF headquarters and no one was injured.

News Channel 3 first covered the attack on June 1 and EVRWF put out stills of the firebombing on June 2 in hopes of receiving tips leading to the suspect.

According to the DOJ, several people came forward with information that allowed law enforcement officials to identify Espriu.

Investigators discovered social media accounts believed to belong to Espriu, including a Twitter account that, three days before the EVRWF firebombing, tweeted: "I wanna go burn sh** n get hit with tear gas.”

The criminal complaint also revealed that investigators served a search warrant at Espriu’s residence in July that led to the recovery of a green lighter which is very similar to the one used to light the Molotov cocktails.

Officials also recovered audio recordings from a dashboard camera in which they say Espriu is heard telling a woman in late June that he shaved his facial hair after seeing some of the surveillance video broadcast on local news.

In the audio recordings, Espriu says he manufactured the Molotov cocktails by filling three bottles with gasoline and inserting a towel into one bottle. He reportedly then recounts the details of the firebombing as seen on the surveillance video, according to the complaint.

According to the DOJ, if he is convicted of attempted arson, Espriu would face a mandatory minimum sentence of five years in federal prison and a statutory maximum sentence of 20 years.

Espriu was booked at the Robert Presley Detention Center in Riverside where he was being held in lieu of $1 million bail. He was expected to be taken into federal custody Thursday and make an initial appearance Friday afternoon in United States District Court.

The investigation is being conducted by the FBI’s Inland Empire Joint Terrorism Task Force.