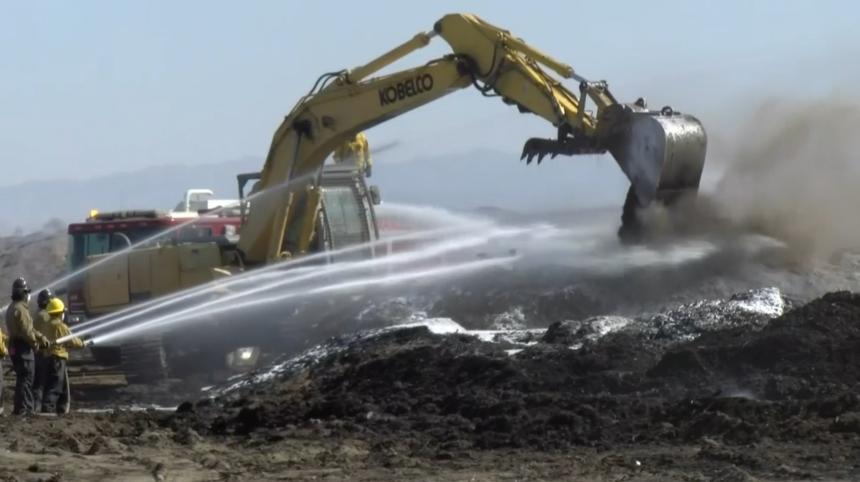 The Martinez Fire, the 52-acre mulch fire that forced schools to close district-wide for a week in the east valley, is now believed to have been set intentionally.

The fire first ignited on October 14 at the Sun Valley Recycling Center, on 66th Avenue and Martinez Road near Thermal. The facility had been shut down about two weeks prior to the Martinez Fire after several other mulch fires burned there earlier this year.

While the exact cause of the fire remains under investigation, in an update Tuesday, the Bureau of Indian Affairs ruled that the fire is suspected to be caused by arson.

Kevin Carey, the owner of the facility, told News Channel 3 days after the fire started that it was started on purpose.

"This is arson that's set," Carey said. "We don't have time here to be burning our product, burning our profit. Really? We don't do stuff like that."

The waste center is located less than a mile from three CVUSD schools. At its worst, the poor air quality sent 15 people, mostly students, to the hospital wth smoke-related health issues. Officials shuttered all district schools for several days due to air quality concerns.

Work to fully put out the Martinez Fire continues. According to the Bureau of Indian Affairs as of Tuesday, the fire was 100 percent contained and 98 percent controlled. Heavy equipment has spread and flattened nearly all the mulch piles to help expose any remaining heat.

The majority of the firefighters and resources assigned to this fire will be released on Thursday, according to the BIA. The fire is expected to be fully put out sometime this month.

Officials announced there is a reward of up to $10,000 for information that leads to the arrest and conviction of any arsonist connected to the Martinez 3 Fire or any other fires in the area.

Additionally, the BIA reiterated that any dumping of materials at the Sun Valley Recycling Center is illegal. Officials ask that you report all illegal dumping seen in the valley by calling 909-766-2838.