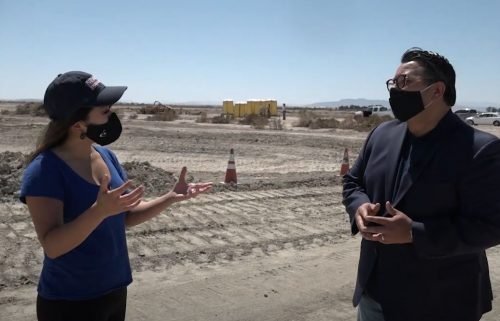 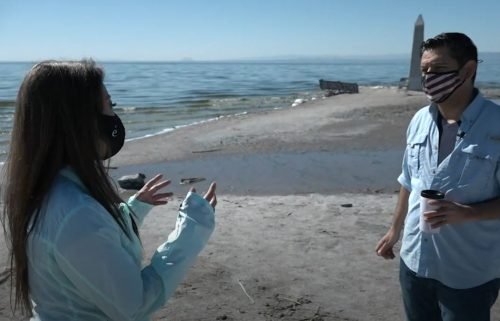 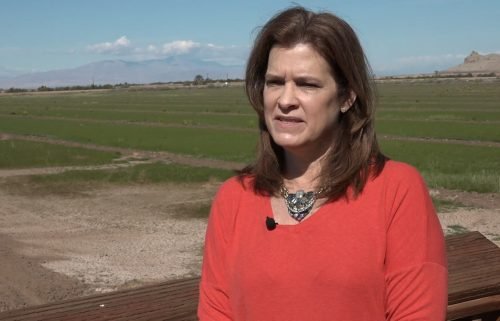 Across the vast expanse of the Salton Sea, white gold can be found deep below the waters. The Salton Sea has been called "Lithium Valley" for good reason.

"One of the single best locations, one of the largest geothermal reservoirs in the world is right at the Salton Sea," Jonathan Weisgall, Vice President of Government Relations for Berkshire Hathaway Energy.

The Salton Sea runs along what's called "The Ring of Fire," a horseshoe of high volcanic activity where the most geothermal movement can be found.

Lithium is a byproduct of the geothermal energy process and a necessary component of lithium-ion batteries, used to power a myriad of technology, like electric vehicles, iPhones, power tools, drones, and more.

Berkshire Hathaway Energy owns 10 of the 11 geothermal plants around the lake, and it recently won government grants to see whether it can recover lithium here on a mass production level. This particular lithium recovery process has never been done before.

"There is an arms race going on globally for batteries, and the United States is a bystander in this race. China is winning this race. China controls almost all the raw materials for battery production. We are bystanders as a country. Where do you start to make that up? At least in the raw materials. So if we can show that the lithium, one of the main products for lithium ion batteries, can be produced domestically, that could really jumpstart a much more robust, clean energy, battery economy in the United States," Weisgall said.

Strange to think a place that saw its golden hour pass long ago could once again strike that hour just as we're running out of time. If lithium is successfully recovered here, Berkshire Hathaway has said it'll increase its investment into the surrounding impoverished communities.

For the decades of lip service, inter-agency fighting and broken promises, leaders say it's time to look forward because there's now renewed hope.

This past September saw the first Congressional hearing in 23 years on the dying lake. Congressman Raul Ruiz has crafted a Salton Sea bill to pull federal funding and speed up projects. He hopes to have it voted on by the end of the year.

The federal government is also funding the Bombay Beach Wetland Project for $700,000, which is still in the planning stages and won't break ground until, at its earliest, 2023.

As for the state, work has finally started on the woefully-delayed Salton Sea Management Plan, a ten-year initiative to improve conditions by creating 30,000 acres of habitat and dust suppression.

"I think what we have here today is less finger pointing and more action when it comes to the groundbreaking that took place here. This is referred to as the backbone project, and it took a lot of time and energy to get people to agree to get this off the ground ... we're here," said Assemblymember Eduardo Garcia.

News Channel 3's Angela Chen hopped on an airboat with CA Fish and Wildlife Services to see the state's "Species Conservation Project" up close. In the video, you can see how low the water is in some parts.

Another $19 million has also been secured for the North Lake Demonstration Project led by Riverside County and the Salton Sea Authority. The intent is to restore habitat, tamp down the dust and hopefully bring recreation and investment back to the lake.

"California's solution to affordable housing is right here in the Coachella and Imperial Valleys. You can build houses here a lot cheaper than you can anywhere else ... the projects that we develop and the costs associated with those projects have to demonstrate long term sustainable value for the community and for the state," Patrick O'Dowd, executive director of the Salton Sea Authority, said.

But value means different things to different people. Some want the sparkling sheen of Hollywood to grace the waters again, but to some experts, we're too far gone. Instead, they say the focus should be on treading water -- maintaining the salinity levels and not letting things get worse.

There's also debate over whether to fund smaller but achievable wetlands project or to think generationally by looking at the bigger picture. The Salton Sea is drying up, and for some, the answer to refilling it is to dig a canal from the Gulf of California.

This proposal posits that gravity would naturally carry the flow of the water since the lake is below sea level.

"It makes sense to add from a virtually limitless source which is the Pacific Ocean," said Kerry Morrison, founder of The Ecomedia Compass and former mayor of West Shores. "It's the only source where there's enough water to make a difference. It doesn't make sense to pour the last of our Southwestern drinking water into a very salty lake."

The newest construction proposal puts this gulf-to-lake plan at around $832 million, but others say, while it would be wonderful to have a port at the Salton Sea, it's currently a pie in the sky dream.

"It would be a great economic boon for this location. We're not there yet and we have dust being exposed and so we need to stop the bleeding, to save the patient and then once we can get to that stable place, then we can think of the more grand plans that the folks are thinking about," Congressman Raul Ruiz said.

Others say desalinating the lake is the answer, but with our continuing droughts, water shortages, and the arduous effort of cleaning it just to dump it back into the lake, experts say this proposal is unlikely.

"If you're looking at the deterioration of the Salton Sea, you have, time and again, from really, day one with Rockwood and others, of people putting short-term profits ahead of long-term sustainability," said Michael Karp, an environmental historian at CSU San Bernardino.

But perhaps it's different this time. The Coachella and Imperial Valleys are seeing the most action at the lake now than in the past 15 years.

"I don't see death and decay. I see a lot of opportunity here. There is still life in some of our darkest moments," Ruiz said.

Check out Part 1: Paradise Lost - Angela looks back at the history of the Salton Sea. Find out it's connection to Spanish explorers, and how it went from one of the most popular destination to abandoned and on the verge of disaster

Check Out Part 2: Toxic Exposure - Angela goes in-depth on the history of toxic outbreaks at the Salton Sea and its connection to the current health issues of those who live near the lake

Check Out Part 3: A Lake Languished - Angela look at the millions spent over the years to save the Salton Sea and why there is so little progress to show for it