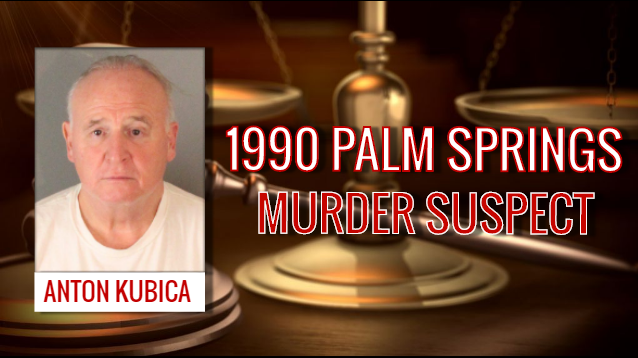 Kubica is accused of killing Marie Darling, 78, of Palm Springs woman, whose remains were found spread over 200 yards in the desert east of the Cactus City rest stop on June 20, 1990.

Prosecutors allege Kubica killed Darling prior to transferring large sums of money into his bank account to pay off the mortgage payments for a house in Palm Springs. In total he is accused of draining more than $180,000 from the senior citizen’s bank account.

A motion filed in April by Kubica's attorney, John Dolan, sought to have the case dismissed, arguing that there is no physical evidence that connects his client to the murder.

Riverside County Superior Court Judge Russell Moore ultimately sided with the prosecution, which countered that although there are no eyewitness accounts, or DNA evidence, the "mountain of circumstantial evidence" in the case pointed to Kubica as the prime suspect.

A criminal complaint was filed against Kubica in 2014, but it took until last October to have him extradited to Riverside County from Canada

During the initial investigation into Darling's death, investigators found two safes at her condominium, one of which was open. An empty currency wrapper for $2,000 was found in a trash can near the open safe, now-retired Palm Springs police Detective Carl Carter testified at the defendant's preliminary hearing.

In 1993, Carter led the murder investigation and went to Kubica's then primary home in Scottsdale, Arizona.

"There was a plethora of evidence at his home," Carter testified.

Darling's family attorney found that in June 1990, nearly $185,000 was transferred from her Swiss bank accounts to a bank in Anguilla, with the transfers accompanied by a letter signed "Marie."

Bank records from Anguilla allegedly showed Kubica withdrew $170,000 from the account, with some of the money transferred to the Royal Bank of Canada. Kubica allegedly established the Bank of Anguilla account on May 24, 1990.

Kubica is being held at the Larry D. Smith Correctional Facilty in Banning in lieu of $1 million bail.