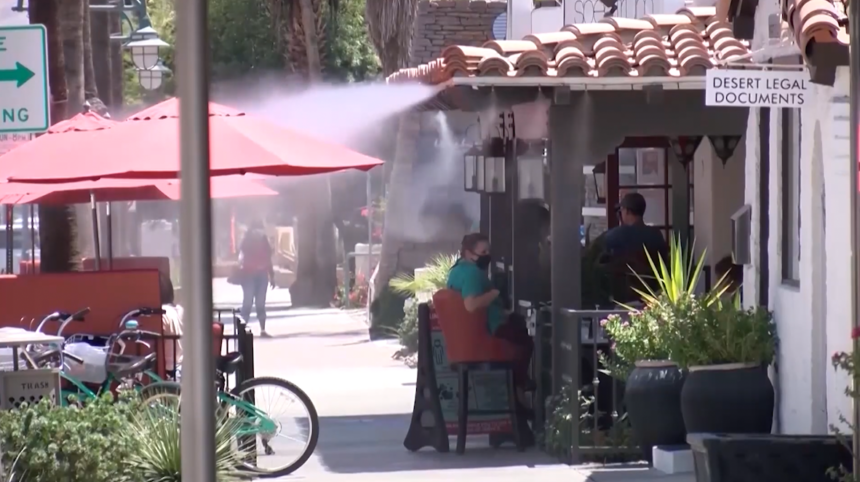 As of Sunday Riverside County was just a few days away from results handed down by the state that could cause it to fall back into the state's most restrictive reopening tier. Last Tuesday California Health and Human Services Secretary Dr. Mark Ghaly said the county would remain in the 'red' tier of the state's reopening plan for at least another week. That's after the county failed to meet key coronavirus metrics to maintain its status.

If the county moves backward into the 'purple' tier, movie theaters, gyms, restaurants, zoo's, museums and places of worship will have to transition from limited indoor service to only outdoor operations.

"It’s very difficult-- especially I think we change times around November so it’s going to get darker quicker, and that impacts of course our masses," Monsignor Howard Lincoln of Sacred Heart Catholic Church in Palm Desert said.

Lincoln is waiting to see whether the transition to indoor worship will be short-lived, since the county has only been in the 'red tier' since September 23.

"The time change, if we go outside, makes an impact because of lighting. We do have some lighting on our outside, but many churches don’t. There’s also the factor of the temperatures. We will get down much cooler and so I’m asking people to come to church at 6 or 7 in the morning and it’s 45 to 50 degrees and of course at night as well," said Lincoln.

Another challenge for the church is organizing seating for 100 people outside, and upon reservation.

As of Sunday Riverside County was within the positivity rate threshold set by the state to remain in the red tier – 5.9 percent. But the new case rate (per day per 100,000 people) was 9.2 – outside the state's threshold of between 4 and 7.

Fairweather frequently visits the desert and was in La Quinta on Sunday.

Others were on the fence.

"It’s tough from many perspectives and so I think we all have to find a balance that keeps in mind our own health, but more importantly for those that we care about and that we care about everybody’s health," said Seattle resident, Scott Torrey. Torrey and his son, Zach, were both visiting La Quinta over the weekend. They have dealt with strict coronavirus regulations after the state of Washington became the epicenter for the virus early during the outbreak in the United States. "If it’s the sacrifice we have to make I get it and we’re willing to make it but we’re also willing to be really responsible and wear a mask, and avoid contact and distance so I think it’s that combination."

One group of Los Angeles visitors was also in the Coachella Valley over the weekend.

"I would say especially for seniors, whatever they need to do to keep us safe is the most important thing and if that means being outside, not eating inside or staying home, that’s what we got to do," said Anita Fildes.

The shutdowns have taken a toll on the local economy.

"I hope people will be careful because I do care about all the people who have been sick or have died of this terrible virus, and I’m not trying to disrespect that at all," said longtime La Quinta resident, Ellen Way.

Way understands the importance of keeping people health, but she has other concerns.

"As a mom I am very concerned about what this is doing to our children who are not in school and my friends who own local businesses that wouldn’t be able to open again," said Way.