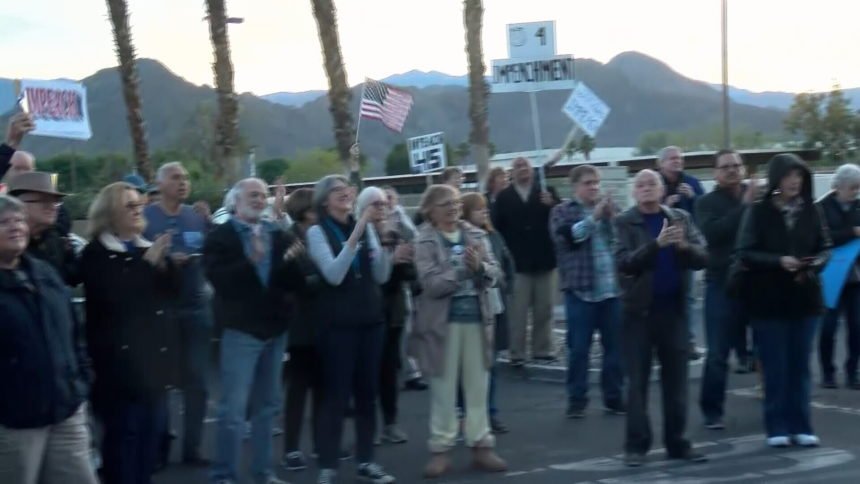 The day before the House of Representatives meets to vote whether or not to impeach President Donald Trump, hundreds of locals gathered in Palm Desert for a rally in support of a yes vote.

Supporters gathered in front of Congressman Raul Ruiz's Palm Desert office. Over 550 people signed up to attend the local event. Several similar rallies were held 600 cities across the United States.

Ruiz's office was chosen as the location as supporters wanted to show their support support his vote for impeachment. On Monday, Ruiz announced he would to impeach Trump.

Ruiz cited an abuse of Trump’s power by conditioning millions in military aid for a foreign ally to investigate a political rival and obstructing Congress from its constitutional oversight role.

Ruiz wrote in a statement, "President Trump’s actions have left me with no choice. By conditioning millions in military aid to a foreign ally on an investigation into his political rival, Donald Trump abused the power of the presidency for personal political gain. He then obstructed Congress in its constitutionally mandated oversight role. In doing so, President Trump violated our Constitution, compromised our national security, and undermined the integrity of our democratic process.”

Those in attendance added that the rally demonstrates the physical people and bodies that believe Ruiz is making the right choice but voting to impeach the President Donald Trump.

"What we're doing here, is show Dr. Ruiz that we support what he's doing. We're not here to protest. We're not here to get him to change his mind. We're here to show him that the constituents in his district support what it is that he is doing and we want him to vote for impeachment and we support that he is voting for impeachment," said Becki Robinson, an activist with the local group "Courageous Resistance."

Local activist, and former State Senate candidate, Joy Silver MC'd the event. Silver was one of many speakers during the rally.

We reached out to the East Valley Republican Women's Federated for a reaction to the rally. A representative said they didn't want to dignify the ignorance with a response.

Stay with News Channel 3 all day Wednesday for the latest updates on the impeachment vote.