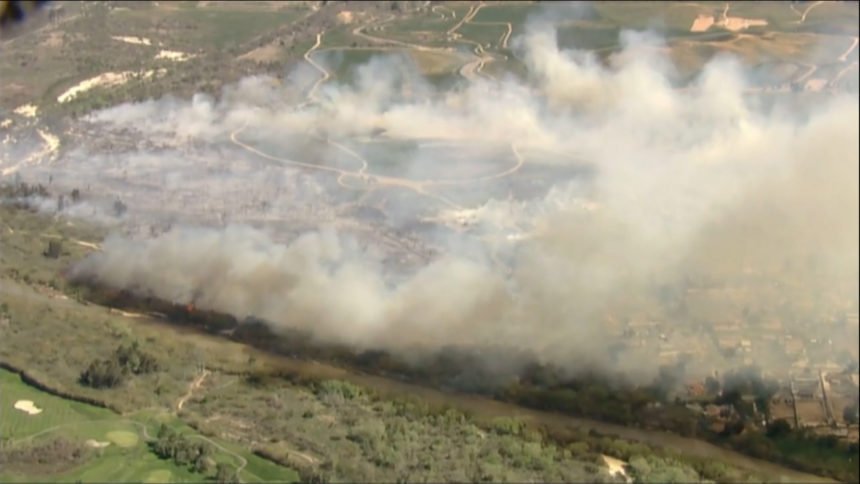 A wind-whipped brush fire broke out today in the Santa Ana River bottom on the east end of Norco, quickly blackening roughly 100 acres and prompting evacuations.

The blaze was reported about 10 a.m. in the vicinity of Arlington and California avenues, within the Hidden Valley Wildlife Area, according to the Riverside County Fire Department.

Multiple engine crews and truck companies from the county and city of Riverside, as well as Cal Fire hand crews, numbering several hundred personnel, were sent to the location and encountered flames burning in thick vegetation. A battalion chief at the scene described the wildfire as "well established" with the potential to expand to 1,000 acres if unchecked.

A mandatory evacuation order was implemented for all properties between Grulla Court to the north and Eighth Street to the south, Pedley Avenue to the west and Crestview Drive to the east.

No structures had burned as of noon, but firefighters deployed for structure protection at 4475 Hillside Ave. and 4600 Pedley, according to reports from the scene.

Four Cal Fire water-dropping helicopters were summoned to make runs on the blaze. Fixed-wing air tankers were not flying, apparently because of the windy conditions, which forecasters said were expected to abate by mid- afternoon.

There was no immediate word on what triggered the fire. The river bottom is dotted with homeless encampments, and warming fires lit by the inhabitants are notorious for turning into infernos during high winds.