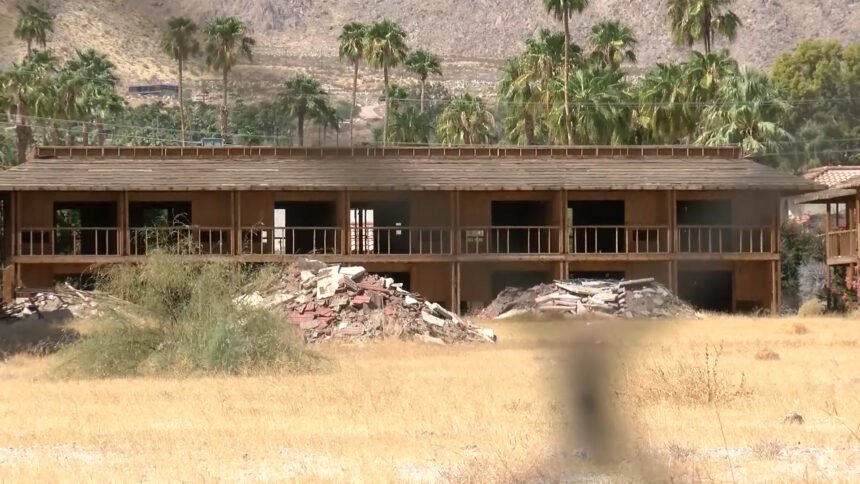 Two months ago, the city of Palm Springs issued a notice of violation to the property owner of the proposed site of the Tova Hotel and Beach Club project in downtown.

The property, located at 1875 N Palm Canyon Drive, was formerly the Garden Vista Hotel. The original plan first unveiled in 2016 was to renovate and rebrand the land as the Tova Hotel and Beach Club.

News Channel 3's John White found in his I-Team investigation back in July, the project is a target for receivership because it's stalled out.

The hotel was slated to open in 2021, however, incomplete structures have stood at the property for a long time.

City Attorney Jeffrey Ballinger said in a city council meeting earlier this month that the project has been considered a blighted property for quite some time now. The city has issued six administrative fines to the property owner, with the last one being $30,000.

The city actually issued a notice of violation on July 22, 2020 due to "unlawful conditions that constitute a public nuisance and that pose a substantial danger to the health, safety, and general welfare of the occupants, the surrounding community, and the public."

The owner was given until September 18, 2020 to comply. The owner did not comply with the notice past the 90 days they were given, city officials confirmed.

Notice of Violation for Tova HotelDownload

Officials say the city is now legally authorized to go to court and seek a remedy there or the city can abate the nuisance itself.

The latter option would include razing, or destroying, the structure. In order to do this abatement, the City would first need to get an abatement warrant from a court.

City officials say that they should know what the decision the city will make by next week.