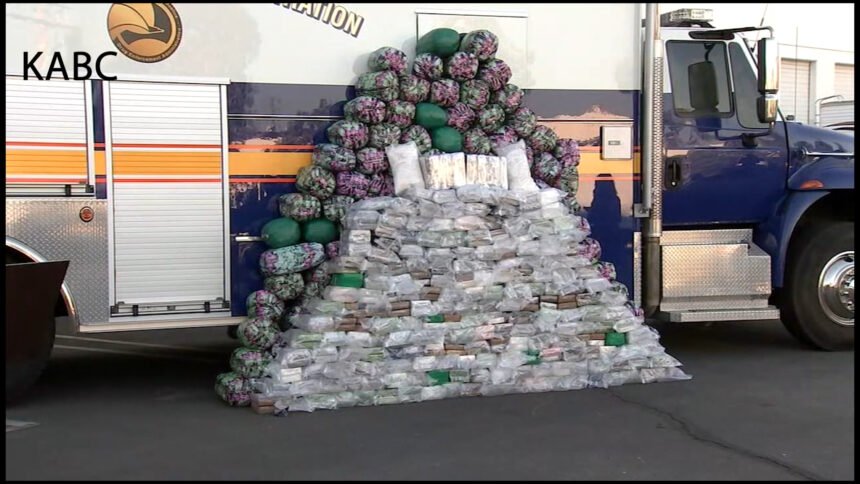 What's touted as the largest methamphetamine bust in the nation's history was announced today by federal agents, who seized more than 2,000 pounds of crystal meth, along with nearly a thousand pounds of cocaine and heroin, from a Mexican drug cartel's stash house in Perris.

"This is enough dope (for) a dose of meth for every man, woman and child in the United States and Mexico," U.S. Drug Enforcement Administration Acting Administrator Timothy Shea said. "Study after study shows that where there is meth addiction, there is also an uptick in violent crime, including robberies, assaults and murders.''

Agents seized more than 4,800 pounds of meth nationwide and are still working on more arrests, according to the DEA.

The biggest haul was in Perris, where DEA agents and investigators from several municipal police departments last week confiscated 2,224 pounds of
meth, 893 pounds of cocaine and 13 pounds of heroin, according to Shea.

"The largest DEA domestic seizure of methamphetamine in history is a significant blow to the cartels, but more importantly, it is a gigantic victory for communities throughout Southern California and the United States that have had to deal with the torrent of methamphetamine coming into their neighborhoods," he said. "We continue to work with our state and local partners to attack drug trafficking at all levels, and this seizure sends a clear message that we mean business.''

According to the DEA, an investigation into transportation and supply of illegal drugs flowing into the country from south of the border focused on the Sinaloa cartel, which has been operating in the Otay-Mesa area. Since June, couriers and a stash house for the drugs were identified through ongoing surveillance, much of it conducted by Fontana Police Department
personnel, authorities said.

The historic Southern California seizure stemmed from a shadowing operation on Oct. 2, when investigators observed a courier make a drop in a Sam's Club parking lot in Moreno Valley. Two duffel bags replete with narcotics allegedly changed hands. The parties involved were detained, culminating in a search warrant being obtained and served at the courier's Perris residence.

Twenty-five duffel bags loaded with cocaine, heroin and meth were seized, according to the DEA.

"The significant seizures ... thwarted drug traffickers' plans to profit from these dangerous drugs that cause incredible harm to our communities," Acting Assistant Attorney General Brian Rabbitt said. "The Justice Department is committed to making our neighborhoods safer by aggressively disrupting drug cartel operations in the United States.''

The drugs were intended for distribution throughout the region, investigators said.