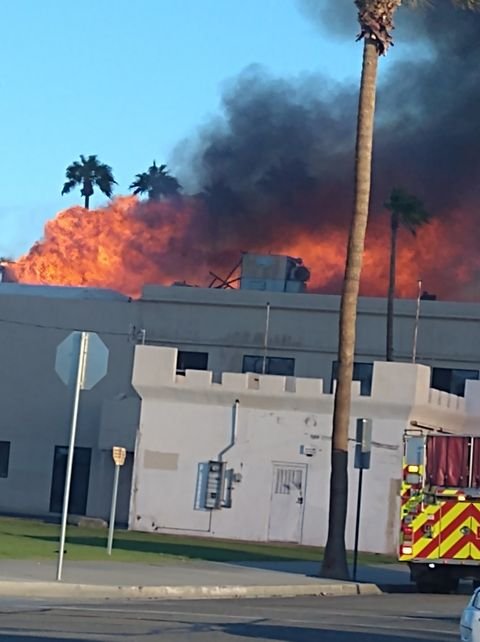 The abandoned Desert Theatre on Fargo Street in Indio was deemed a 'total loss' by CalFire Saturday after a fire broke out inside the building. Crews were called out to the 45000 block of Fargo Street at 7:08 a.m.

"The first engine company had found a commercial building, which was an old theatre here in the city of Indio that was at 50%. The roof had already collapsed and they had some exposures to the north and to the south," said Cal Fire Capt. Fernando Herrera.

A viewer sent in video after the fire erupted, which showed flames spewing from the roof.

"We ended up going into a defensive attack, basically meaning that we fought the fire from the exterior because the roof of the building was compromised. The rest of the building is very hard to go interior, it’s unsafe for us to go, we don’t know if the wall could collapse," said Capt. Herrera.

A total of 10 engines and approximately 50 firefighters responded to the scene. By 2:15 p.m. crews contained the fire. No injuries were reported.

"The building of origin was an old theatre itself-- historical building here in the city of Indio for many many years. It’s a total loss, we estimate it to be a $1 million dollars," said Capt. Herrera.

An appliance store adjacent to the theatre sustained water damage, according to Herrera. The agency estimated a save of $3 million dollars to the neighboring buildings.

A skip loader was later brought in after Cal Fire received approval from the city. The heavy machinery was used to remove the front wall, which allowed crews access to areas that continued to smolder.

As of Saturday the cause of the fire was still being investigated. Law enforcement officials told News Channel 3 that upon arrival, first responders saw several people at the scene.

"We have had problems chronically with people getting into this building," said Indio City Manager, Mark Scott.

Scott said that the theatre has been red-tagged and locked up, but that hasn't kept transients from breaking and entering.

"This particular block has been a concern for a while because the older buildings have been an attractive nuisance for people who were looking for places to sleep in the cold," said Scott.

A building on the other side of the theatre also sustained fire damage, after a separate incident caused it to go up in flames.

"We think that both of these buildings are a total loss," said Scott.

The city has been working to revitalize Fargo Street, which Scott said, once served as a historic shopping street.

"We’ve been working for a while to come up with a plan for the demolition of these buildings. Unfortunately the fire has beaten us to it," said Scott.

Although the fire destroyed much of the historic buildings, Scott believes there is a silver lining.

"It’s sad. We’re all feeling a little bitter sweet about this but it does open up the door to redevelopment that we think is going to bring some real vitalization downtown. Maybe it’s the start of something good, but today we’re feeling the loss," said Scott.