A 19-year-old reputed gang member accused of helping a fellow gang member elude capture after the man allegedly gunned down a Cathedral City resident last year pleaded not guilty today to accessory after the fact and other offenses.

Joel Sanchez of Cathedral City was taken into custody last Tuesday in Tijuana, Mexico, and is now in custody at the Blythe Jail in lieu of $500,000.

Sanchez is one of four men thought to be members of the same criminal street gang arrested in connection to two shootings reported a few hours apart in Cathedral City, including one on March 23, 2020, that left 43-year-old Ruben Hernandez dead.

Hernandez's 11-year-old daughter was also wounded in the attack, but survived, according to the Cathedral City Police Department.

Sanchez was arraigned at the Banning Justice Center before Riverside County Superior Court Judge Alfonso Fernandez, who scheduled a felony settlement conference for May 5 at the Larson Justice Center in Indio.

In addition to accessory to murder, Sanchez faces gun and drug-related felony and misdemeanor charges.

Sanchez is suspected of helping 21-year-old Gabriel Hernandez of Indio -- one of two men charged with murder in Ruben Hernandez's killing -- avoid capture by helping him hide in Mexico, according to court papers.

Gabriel Hernandez remains on the lam.

Both Sanchez-Casas and Bravo remain in custody and were scheduled to return to court on May 13 for a felony settlement conference.

According to Cathedral City police, Gabriel Hernandez approached the front door of a house in the 29000 block of Avenida La Vista about 6:40 p.m.

March 23 and began firing as Ruben Hernandez stood in the doorway and his daughter stood nearby. Hernandez died at the scene, and paramedics took his wounded daughter to a hospital.

Ruben Hernandez was "not involved in criminal activity," according to police.

A motive in the shooting has not been provided. A second shooting was reported in the early morning hours of March 24 in the 33300 block of Wishing Well Trail, police said. Several shots were fired at a home with people inside about 2 a.m., but nobody was injured.

The investigation into that shooting yielded "witnesses and physical evidence'' that connected back to the first shooting, which occurred less than three miles away, police said.

Anybody with information related to Gabriel Hernandez's whereabouts was urged to call the Cathedral City Police Department at 760-770-0300. 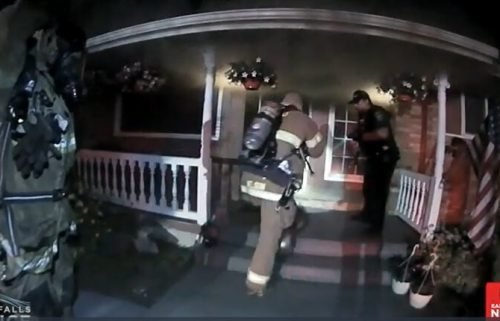