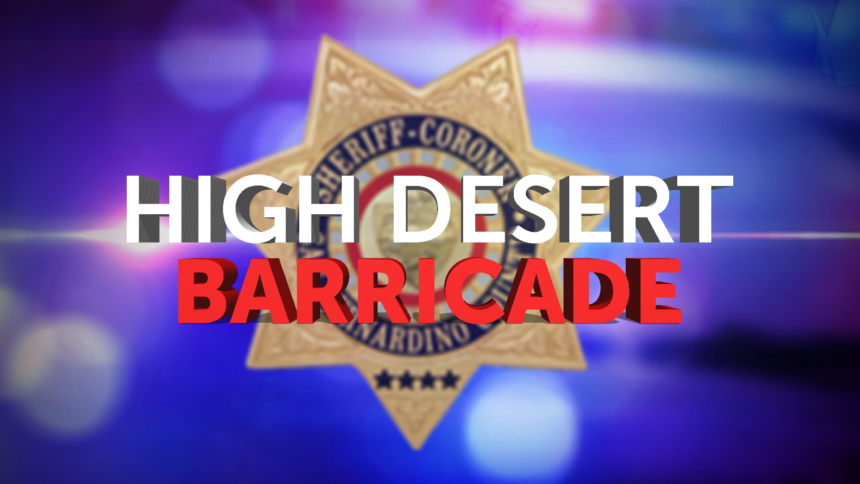 A Yucca Valley man died on Sunday from an apparent self-inflicted gunshot wound after a lengthy barricade which ended after deputies utilized a robot to clear their entry into the suspect's residence.

52-year-old David Rodrigue was pronounced dead a residence on the 58100 block of Pimlico Street which was at the center of the barricade.

At 7:20 p.m. Saturday, Morongo Basin Sheriff's Station deputies responded to the home for a report a domestic disturbance and possible attempted suicide.

"The reporting party advised dispatch that she believed her father, David Rodrigue, was an immediate threat to her and her family, acting erratically, armed with a firearm," read SBCSD's release on the incident. "She also believed he was attempting suicide and had fired the firearm inside the home.  Upon arrival, deputies were able to assist the family to safety."

Deputies negotiated with Rodrigue in an attempt to have him safely surrender and exit the home. Rodrigue failed to comply with deputies' requests, then discharged a firearm while within his home. Special Enforcement Division (SED) deputies were then requested to the scene.

Negotiations continued with SED deputies for a period of time. In the early morning hours of December 1, Rodrigue stopped responding to SBCSD's attempted communications and phone calls.

SED then used a chemical agent to attempt to flush Rodrigue out of the home, but he did not exit. Deputies then deployed a robot into the home and found Rodrigue who was suffering from an apparent self-inflicted gunshot wound. He died from his injuries.

Homicide Detail investigators took over the investigation and found a gun next to the suspect. No deputies or family members of Rodrigue were injured during the incident.

"The investigation is ongoing, and anyone with information is urged to contact Detective Nick Craig, Specialized Investigations Division – Homicide Detail at (909)387-3589 or Sheriff's dispatch at (760)956-5001," read SBCSD's release on the incident. "Callers can remain anonymous and contact WeTip at 800-78-CRIME or www.wetip.com.

The Riverside County Coroner's Bureau will be conducting the autopsy.