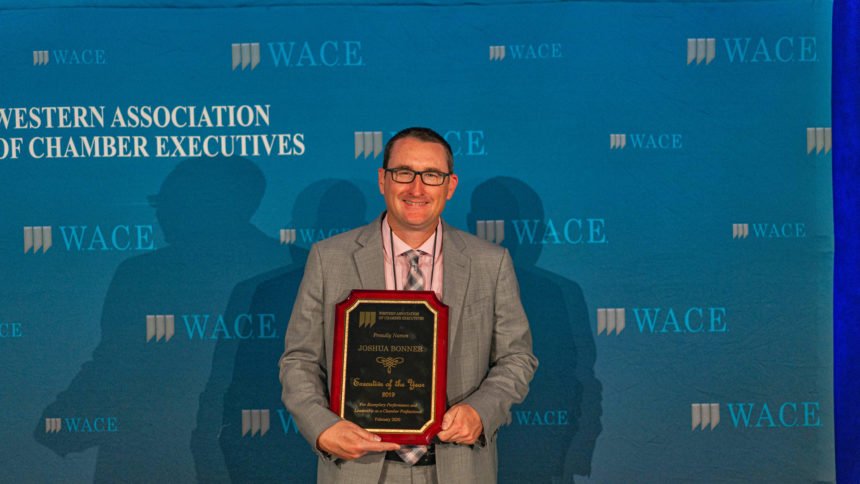 Joshua Bonner, President and CEO of the Greater Coachella Valley Chamber of Commerce (GCVCC) was named the Executive of the Year by the Western Association of Chamber Executives at the WACE Annual Conference in Portland, Oregon.

WACE is an association that represents over 850 chamber professionals in 19 Western states and Canada. Every year, the association considers executives from across their membership for the honor.

The award is based on an executive's overall achievement within their chamber, their impact on their local community, and their contribution to the chamber industry. Judges look at candidate's five areas of expertise including finance, communications, legislative action, and membership services performed by the chamber.

Bonner's accomplishments within the past year ranged from establishing new partnerships to open East Valley business incubators and shared workspaces, to the chamber’s advocacy work in Sacramento.

“It’s an honor,” says Bonner about the award. “WACE is a huge organization, basically your work is being distinguished among 800 of your fellow chambers across the United States. It brings me a lot of pride being able to bring this award home to the Coachella Valley and have our business community recognized for all their hard work. I work with a tremendous board of directors and a great staff. Some of the things we have been doing for the last three-plus years is visionary within our industry, and the industry has taken notice.”

Bonner, an Indio resident, has served as the Chief Executive Officer of GCVCC since it’s inception in 2016 and in a chamber executive role since 2014.

GCVCC is a regional chamber formed to support a diverse business community that spans nearly forty-five miles. It was initially formed as a partnership between the Indio, La Quinta and Coachella Chambers of Commerce. Since then, however, the Cathedral City, Desert Hot Springs, and Unincorporated Riverside County Chambers have added their local chamber group, along with the local Palm Springs American Advertising Federation Club.

"With an annual budget that now reaches almost two million dollars, they have quickly become one of the largest and most influential chambers in California," reads a release by WACE.