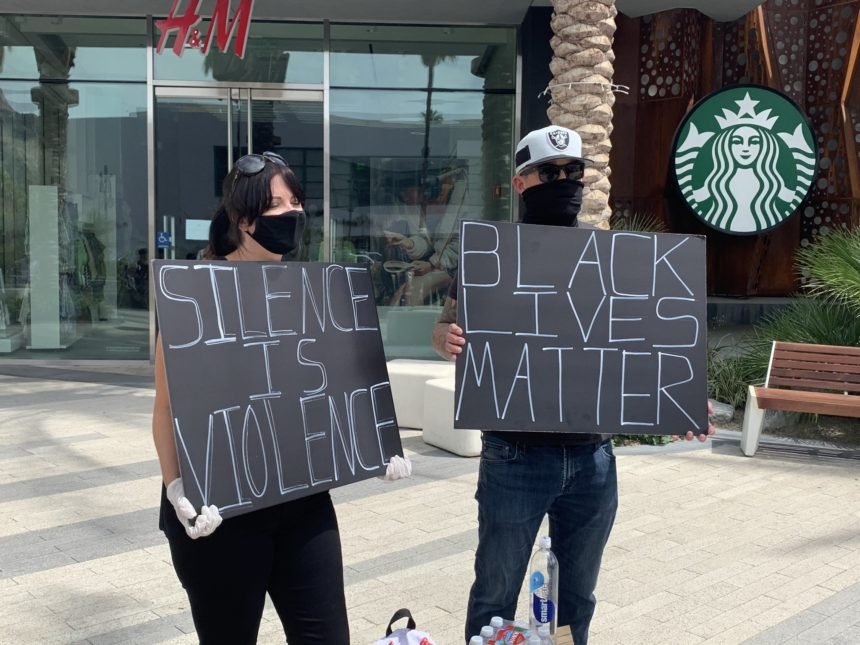 A protest is underway near Taquitz and Palm Canyon in downtown Palm Springs.

Police say the protest is being advertised as peaceful. The demonstration is set to last from 10 a.m. until 4 p.m.

The event is one of several planned throughout the Coachella Valley this week in response to the death of George Floyd.

Activists across the country and world have mobilized in marches and protests in the wake of the killing of George Floyd. Floyd was killed after a Minneapolis officer kneeled on his neck while handcuffed. While many protests have remained peaceful, many others have been marred by violence, vandalism and looting.

Other action expected in the Coachella Valley includes a protest on El Paseo in Palm Desert Monday night. In anticipation of this, nearly two dozen businesses have boarded up their windows. Traffic has also been restricted on that road.

The El Paseo event organizer's social media account shared information discouraging any violence, one post reading in part, "... our intention is not to invoke violence. I envision a peaceful protest to showcase #blacklivesmatter."

Another post reading, "We are in no way, shape, or form promoting violence. We will spread awareness and honor those who have lost their lives to police brutality."

Also Monday, a planned gathering in Indio will draw attention to the deaths of George Floyd and Ahmaud Arbery.

Arbery, who was black, was jogging outside Brunswick, Georgia, on February 23 when Gregory McMichael and his son, who are white, chased him after him, authorities said. The case is being investigated as a hate crime.

There will be a few speakers from the community including the Indio Police Department and some local churches.

A group of Coachella Valley teenagers is also planning a protest. "Enough is Enough" initiative is set for Saturday, June 6, in downtown Palm Springs.

The "Young Justice Advocates" who are organizing that event, ask people to join in "this peaceful protest to spread awareness on police brutality within the black community. Any and everyone is welcome so support this cause."

Stay with News Channel 3 for continuing coverage on these events.