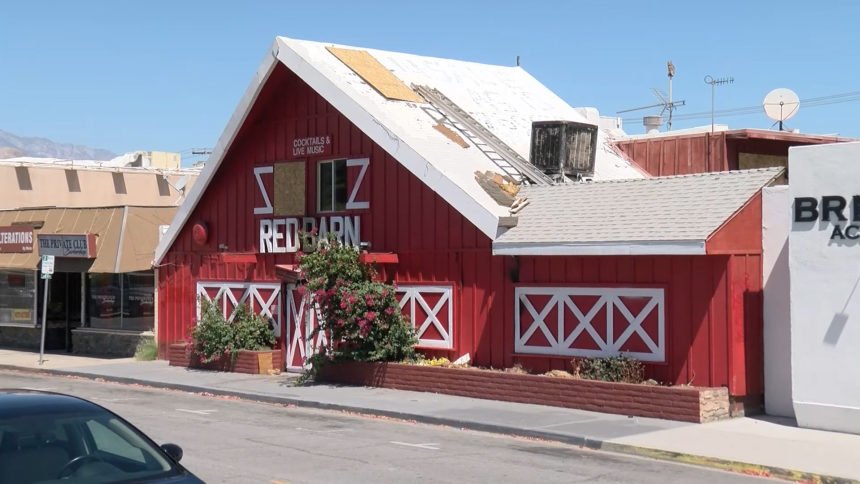 The Red Barn in Palm Desert may or may not be up for sale. The question came up after a message was painted on the side of the roof advertising it as "4 Sale As Is."

A spokesperson for the City of Palm Desert suggested that if the message is indeed a solicitation, it would be a violation of the city's sign ordinance.

The message has been faintly painted over but as of Wednesday morning, you can still see if you squint your eyes enough.

The Red Barn has raised some controversy in the past over its roof messages. Back in May, John Labrano, the owner of the bar, painted "Save jobs! Hang a politician" and "Suck My Governor" on the side of its roof.

Palm desert bar Red Barn has both sides of its roof painted with a message aimed at government leaders. @ShelbyNelsonKESQ has more on the controversy the message has stirred up and what the owner has to say.

Labrano used the messages as a way to speak out against the original stay-at-home orders closing many businesses including his bar.

The Red Barn has remained closed since it was seriously damaged in a fire on June 2.

Labrano suggested the bar was targeted.

"It appears the Red Barn has been victim of violence and destruction, along with other responsible businesses in the Coachella valley including the Republican party headquarters in La Quinta," Red Barn John wrote, a Facebook moniker used by Labrano.

"We've been here for 50 years and we plan on staying for another 50+," Red Barn John wrote.

The building sustained extensive fire damage and has since been red-tagged.

We reached out to Cal Fire for an update on their investigation. Captain Fernando Herrera confirmed Wednesday afternoon that their is still no update.

BREAKING: Cal Fire Law Enforcement is asking the public to call the Arson Hotline at 800-633-2836 with any info on the fire at Red Barn in Palm Desert. The cause of the fire remains under investigation.