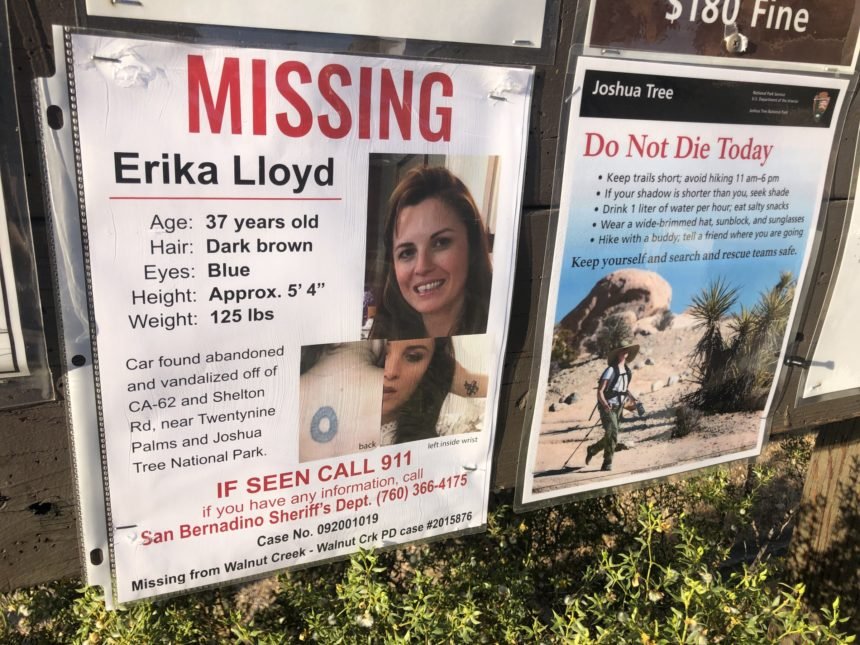 Doug Billings, a cave and mine expert, hasn’t stopped searching.

Billings continues to comb through the desert as he tracks his every move.

“I like to keep data of what I am doing so I’ll mark stuff and assign a number," said Billings.

He has checked every questionable crevice in sight. Billings has volunteered his expertise in the disappearance of Erika Lloyd.

Lloyd was traveling to Joshua Tree National Park for a camping trip when her family say they lost contact with her on June 16th, that same day California Highway Patrol found Lloyd's car abandoned near Highway 62 near Twentynine Palms.

The owners of the towing company gave us a first look at her mysteriously damaged car.

The car has smashed windows, shattered radio, and the airbag was deployed.

“The radiator is extremely smashed backwards,"said David Bailey. "The whole bottom of the radiator, the AC condenser is all pushed back hit very large object.”

And tucked away in the trunk, a folded stroller placed in a laundry basket.

“We were dispatched from by the Highway Patrol to go tow a vehicle near Shelton Road and Highway 62," said Bailey. "The front of the car was facing as if you were going to Twentynine Palms Highway or pointed south.”

The San Bernardino County Sheriff’s Department have told us no foul play here.

And there are indications she drove her car out of the park.

Plus, they found her camping gear at a campsite in Jumbo Rocks Campground.

The Bailey’s believe her car was hit.

Despite the puzzling circumstances, the Bailey’s urge people not to give up.

“Everybody keep looking for her, we’ll find her and hopefully when we find her she’s alive and well," said Bailey.

If you have any information on Lloyd’s whereabouts please contact the Morongo Basin’s Sheriff’s Department (760) 366-4175.