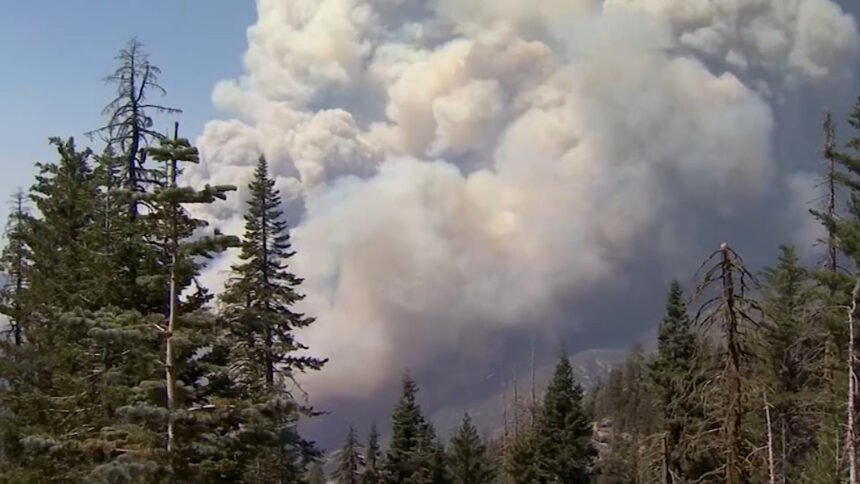 The El Dorado fire continues to burn west of the Coachella Valley. As of Tuesday evening, the fire is at 19% containment and has burned over 11,000 Acres.

The El Dorado Fire was sparked by a smoke-generating 'pyrotechnic device' at a gender reveal party at El Dorado Ranch Park in Yucaipa. Capt. Bennet said the family attempted to put the fire out, but it was too late.

"I could imagine this is a terribly traumatic experience for them, they were going to have a happy family moment, that obviously went terribly wrong," Capt. Bennet said.

Officials spoke with News Channel 3's Shelby Nelson to discuss whether the family could face criminal charges for starting the fire.

Even though the fire started about 50 miles west in Yucaipa, winds have carried smokey conditions toward the Coachella Valley. A smoke advisory is in place through Tuesday night.

Thousands of residents have been forced from their homes after mandatory evacuations were issued for parts of Oak Glen, Yucaipa, Forest Falls, and Mountain Home Village in San Bernardino County.

Evacuation orders were extended to a portion of Cherry Valley in Riverside County on Monday.

Officials said during a virtual community meeting Monday evening that they do not expect evacuation orders to expand into Beaumont at this time.

“everybody thank them please they are doing great, i don’t know how they do it, it was hot at my house and the fire was clear across the mountain on the other side of us.”

Charneskay and her family watched crews attack it by air dropping fire retardant and water into the night.

“All night long we watched go by 2 o’clock in the morning was the worse and I thought those guys are really close how do they stand that heat," said Charneskay.

Over 700 firefighters are the frontlines pushing through difficult terrain to gain the upper hand on containment.

Not only are resources stretched thin but that smoky sky and wind making it difficult for air support.

“If  there's no good visibility. then we won't have the planes up," said Kramer. "And i think people don't realize that when it gets really windy, we can't fly.”

And with those Santa Ana winds expected to pick up, firefighters are prepared.

“We've been working really hard the last three days to get our lines to strengthened our lines," said Kramer.