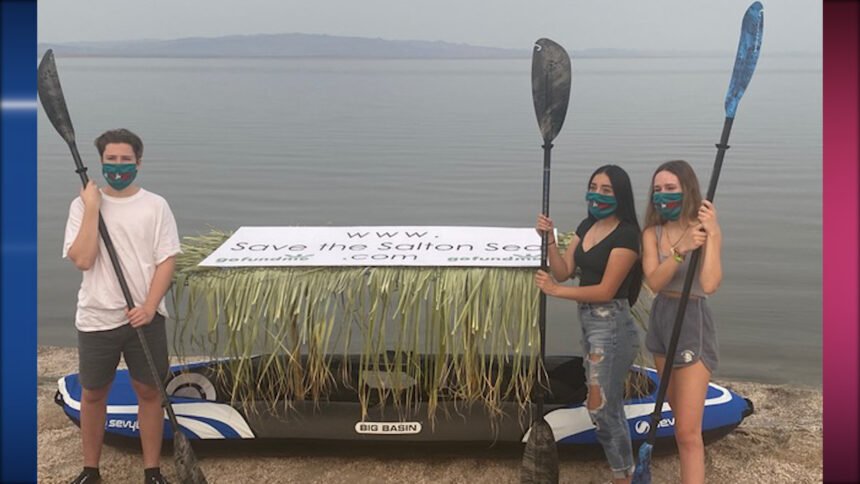 Three local high school students are planning to kayak across the Salton Sea this weekend to help raise awareness of the area's environmental issues.

It's been a noteworthy week in Salton Sea awareness. On Thursday, a Congressional Hearing on the Salton Sea was held, the first since 1997.

The students will start kayaking in the Thermal part of the Salton Sea on Saturday at 7:00 am. The plan is to go across the lake and finish five-hours later at the Salton Sea State Park in North Shore.

The trio also plans to travel to Washington D.C. and Sacramento this fall to meet with Secretary David Bernhardt and Governor Gavin Newsom.

Stay with News Channel 3 for continuing updates on their journey.

Layton Jones, Palm Desert High School senior, was raised in the west end of the valley (Palm Springs), and has been an intern at Congressman Dr. Raul Ruiz’s office since she was a freshman in high school. Her duties at the congressman’s office included researching environmental problems at the Salton Sea and there negative impacts on valley residents. It was at this time when she developed an interest in raising public awareness with the issues associated with the large body of water.

Evalyn Garcia, Desert Mirage High School senior, was raised in the east end of the valley (Thermal), and has worked with the Green Academy, an environmental group that has been focusing on air quality in and around the Salton Sea. Evalyn responsibilities would include collecting air samples throughout the east valley at different times of the day and recording there effect on local residents.

Clayton Jones, Palm Desert High School junior, was also raised in the west end of the valley (Palm Springs), and has an interest in hard science, physics in particular. He too has developed an interest in developing a solution to the issues facing the Salton Sea. He believes that there may be a political answer to the problem but he thinks science will play a big part in overcoming major obstacles.